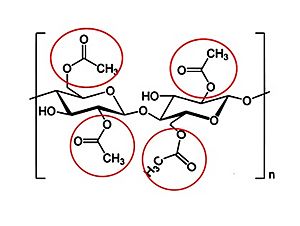 The chemical formula for cellulose

Cellulose has no taste. It is odorless and hydrophilic. It is insoluble in water and most organic solvents. It is chiral and is biodegradable.

Cellulose is made from a form of glucose and makes up most of the cell wall of plant cells. This is what keeps a plant in shape. Humans and other animals cannot digest cellulose but some animals such as termites and ruminants use bacteria to digest it.

It is a polysaccharide, which is repeating units of a monosaccharide joined together by a glycosidic bond by a condensation reaction, there is a by-product of water, found in plants. It is very tough because when you join beta glucose together, they are opposite ways up, the bonds are straight, forming straight chains. There is hydrogen bonds between the polymers.

These fibers are in bundles of about 40, called microfibrils. Microfibrils are embedded in a hydrated network of other polysaccharides. The cell wall is assembled in place. The parts are made inside the cell and then assembled by enzymes associated with the cell membrane. 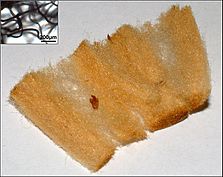 All content from Kiddle encyclopedia articles (including the article images and facts) can be freely used under Attribution-ShareAlike license, unless stated otherwise. Cite this article:
Cellulose Facts for Kids. Kiddle Encyclopedia.