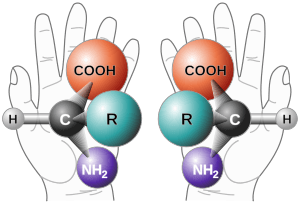 The two enantiomers of bromochlorofluoromethane

Chirality is when an object is present in two forms which are mirror images of each other.

The two forms cannot be superimposed. Human hands are chiral. The left hand is a mirror image of the right hand. You cannot turn or move one of your hands to look exactly the same as the other. This is why you can not put a left handed glove on your right hand, or shake the right hand of a person using your left hand.

In chemistry, chirality refers to molecules. If a molecule is chiral it has two forms that are mirror images of each other but otherwise identical.

Chemists call these enantiomers or optical isomers. Because the difference between right and left hands is easy to understand, chemists call enantiomers either 'right-' or 'left-handed'. A mixture of equal amounts of the two enantiomers is called a racemic mixture.

The symmetry of a molecule (or any other object) tells us whether it is chiral. A molecule is achiral (not chiral) if it has an axis of symmetry.

A racemic mixture is one which has equal amounts of left- and right-handed enantiomers of a chiral molecule.

The origin of homochirality in the first place is much discussed. Most believe that the original origin of chiralities was purely random. They think if carbon-based life forms exist elsewhere in the universe, the chemistry might have different chirality. Other theories are possible.

It was economical for life-forms to adopt one form or the other of each type of chiral compound. That way we do not need two enzymes for every chemical reaction which involves chirality.

All content from Kiddle encyclopedia articles (including the article images and facts) can be freely used under Attribution-ShareAlike license, unless stated otherwise. Cite this article:
Chirality Facts for Kids. Kiddle Encyclopedia.