Some of the relationships that physical chemistry tries to resolve include the effects of: 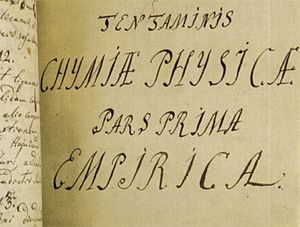 The term "physical chemistry" was first used by Mikhail Lomonosov in 1752. He presented a lecture course with the title "A Course in True Physical Chemistry" (Russian: «Курс истинной физической химии») to the students of Petersburg University.

Modern physical chemistry was developed in the 1860s to 1880s with work on chemical thermodynamics, electrolytes in solutions, chemical kinetics and other subjects. In 1876, Josiah Willard Gibbs wrote an article called, On the Equilibrium of Heterogeneous Substances. This paper introduced many of the main parts of physical chemistry, such as Gibbs energy, chemical potentials, Gibbs phase rule. Other important discoveries include Heike Kamerlingh Onnes' work on enthalpy and macromolecular processes.

The first scientific journal about physical chemistry was the German journal, Zeitschrift für Physikalische Chemie. It was founded in 1887 by Wilhelm Ostwald and Jacobus Henricus van 't Hoff. The two chemists and Svante August Arrhenius were the leading men in physical chemistry in the late 19th century and early 20th century. All three were awarded the Nobel Prize in Chemistry.

Physical chemistry also improved with discoveries in nuclear chemistry, especially in isotope separation. This happened around the time before and during World War II. Chemists discovered important facts in astrochemistry.

All content from Kiddle encyclopedia articles (including the article images and facts) can be freely used under Attribution-ShareAlike license, unless stated otherwise. Cite this article:
Physical chemistry Facts for Kids. Kiddle Encyclopedia.