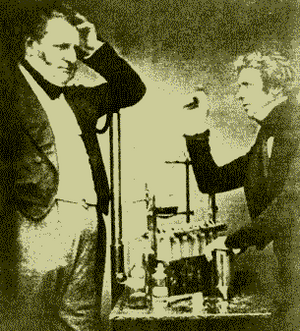 Electrochemistry is a kind of chemistry that studies chemical reactions that use or make electricity: Reactions like this happen at electrodes which are made from something that conducts electricity, and put in an electrolyte. An electrolyte is a solution that has ions in it.

Electrochemistry was "invented" at the same time as the voltaic pile; the first kind of electric battery.

All content from Kiddle encyclopedia articles (including the article images and facts) can be freely used under Attribution-ShareAlike license, unless stated otherwise. Cite this article:
Electrochemistry Facts for Kids. Kiddle Encyclopedia.