Alessandro Giuseppe Antonio Anastasio Volta (18 February 1745 – 5 March 1827) was an Italian physicist, chemist, and pioneer of electricity and power who is credited as the inventor of the electric battery and the discoverer of methane. He invented the Voltaic pile in 1799, and reported the results of his experiments in 1800 in a two-part letter to the President of the Royal Society.

With this invention Volta proved that electricity could be generated chemically. Volta's invention sparked a great amount of scientific excitement and led others to conduct similar experiments which eventually led to the development of the field of electrochemistry. The SI unit of electric potential is named in his honour as the volt.

Volta also drew admiration from Napoleon Bonaparte for his invention, and was invited to the Institute of France to demonstrate his invention to the members of the Institute. Volta enjoyed a certain amount of closeness with the Emperor throughout his life and he was presented with numerous honours by him. Volta held the chair of experimental physics at the University of Pavia for nearly 40 years and was widely idolised by his students. 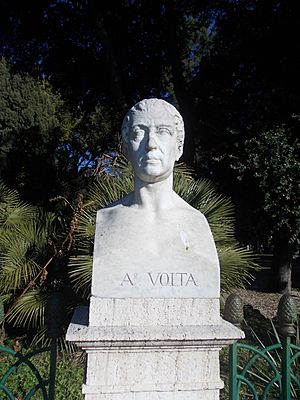 Despite his professional success, Volta tended to be a person inclined towards domestic life and this was more apparent in his later years. At this time he prederred to live secluded from public life and more for the sake of his family until his eventual death in 1827 from a series of illnesses which began in 1823.

Volta's legacy is celebrated by the Tempio Voltiano memorial located in the public gardens by the lake. There is also a museum which has been built in his honour, which exhibits some of the equipment that Volta used to conduct experiments. Nearby stands the Villa Olmo, which houses the Voltian Foundation, an organization promoting scientific activities. Volta carried out his experimental studies and produced his first inventions near the area he was born - Como.

All content from Kiddle encyclopedia articles (including the article images and facts) can be freely used under Attribution-ShareAlike license, unless stated otherwise. Cite this article:
Alessandro Volta Facts for Kids. Kiddle Encyclopedia.