The electric eel, Electrophorus electricus, is a species of fish. It can weigh up to six pounds. It can give electric shocks of up to six hundred fifty watts of electricity. The animal uses these shocks both for hunting and to defend itself. It lives in the stagnant muddy river bottoms of the Orinoco and the Amazon, and uses low-voltage electric fields to find its prey.

The electric eel is an apex predator in the parts of South America where it lives. This means it usually has no enemies except other animals of its own species. It can kill animals larger than itself. Its electric organs evolved from muscles, and make up four fifths of its body.

Despite its name, the electric eel is not an eel. It is a knifefish. It is an obligatory air breather (must breath air). This makes sense, because the muddy water is very low in oxygen, and it needs oxygen to power its electric organs.

Because they can shock, very few of these fish are kept as pets. But if the eel repeatedly shocks, its electric organs become completely discharged. Then a person can touch it without being shocked.

As in other ostariophysan fishes, the swim bladder has two chambers. The anterior chamber is connected to the inner ear by a series of small bones derived from neck vertebrae called the Weberian apparatus, which greatly enhances its hearing capability. The posterior chamber extends along the whole length of the body and maintains the fish's buoyancy. E. electricus has a well-developed sense of hearing. This fish has a vascularized respiratory system with gas exchange occurring through epithelial tissue in its buccal cavity. As obligate air-breathers, electric eels must rise to the surface every ten minutes or so to inhale before returning to the bottom. Nearly eighty percent of the oxygen used by the fish is obtained in this way. 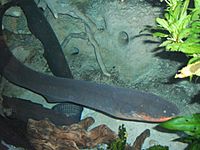 Researchers at Yale University and the National Institute of Standards and Technology argue artificial cells could be built that not only replicate the electrical behavior of electric eel cells, but also improve on them. Artificial versions of the eel's electricity-generating cells could be developed as a power source for medical implants and other microscopic devices.

Electric eels feed on invertebrates, although adult eels may also consume fish and small mammals, such as rats. First-born hatchlings eat other eggs and embryos from later clutches. The juveniles eat invertebrates, such as shrimp and crabs.

The electric eel is known for its unusual breeding behavior. In the dry season, a male eel makes a nest from his saliva into which the female lays her eggs. As many as 3,000 young hatch from the eggs in one nest. Male electric eels are much smaller than the females.

In zoos and private collections

These fish have always been sought after by some animal collectors, but catching them is difficult, because the only reasonable option is to make the eels tired by continually discharging their electricity. The fish's electric organs eventually become completely discharged, allowing the collector to wade into the water in comparative safety.

Keeping electric eels in captivity is difficult and mostly limited to zoos and aquaria, although a few hobbyists have kept them as pets.

The Tennessee Aquarium in the United States is home to an electric eel that uses its electrical discharges to post from its own Twitter account. Named Miguel Wattson, the eel's exhibit is wired to a small computer that sends out a prewritten tweet when it emits electricity at a high enough threshold.

All content from Kiddle encyclopedia articles (including the article images and facts) can be freely used under Attribution-ShareAlike license, unless stated otherwise. Cite this article:
Electric eel Facts for Kids. Kiddle Encyclopedia.