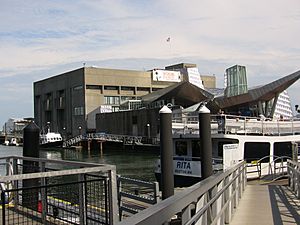 Planning for the aquarium began in 1962, with the principal designer being Peter Chermayeff of Cambridge Seven Associates. The building was opened to the public in 1969. The Giant Ocean Tank opened in 1970, and at the time was the largest circular ocean tank in the world.

In 1974, a multi-storied barge, Discovery, was moored next to the Aquarium. It served as a floating mammal pavilion for the aquarium as the lack of land limited the aquarium's ability for expansion. This 1,000-seat observer stadium overlooked a 116,000-US-gallon (440,000 l; 97,000 imp gal) pool. It hosted dolphins until they were transferred in the mid-1990s, and sea lions, until the ship's decommissioning. Discovery was officially retired in the mid-2000s due to its old age and high cost of maintenance.

In 2013, the Giant Ocean Tank was given a major facelift, with the addition of a replica of a Caribbean coral reef.

In 1999 the aquarium opened a new rehabilitation center for harbor porpoises in Duxbury. The facility includes a 29,000-US-gallon (110,000 l; 24,000 imp gal) rehabilitation tank that can house three porpoises at a time.

The 428-seat Matthew and Marcia Simons IMAX Theatre opened in 2001 in a separate building designed by E. Verner Johnson and Associates. The six-story high screen is 85 feet (26 m) wide by 65 feet (20 m) high, and its projector can show both 2D and 3D movies.

In 2003 the aquarium opened "Amazing Jellies", a $1.9 million, twelve-tank jellyfish exhibit emphasizing that jellyfish are survivors and are actually likely to increase with climate change.

In 2006, the aquarium earned full accreditation from the Association of Zoos and Aquariums (AZA).

In 2010, the Animal Care Center opened. This 23,000-square-foot (2,100 m2) off-site facility in Quincy, includes holding space for animals during exhibit renovations, quarantine space for new arrivals, and is home to the marine animal rescue and rehabilitation center.

In 2013, the Aquarium reopened the Giant Ocean Tank after a ten-month renovation. The new Giant Ocean Tank features a new reef designed to represent a pre-Columbian Caribbean reef, new lighting with the reflective dome, and better views with the new viewing windows along the tank. Additionally, the number of fish in the tank has increased from 800 to 2,000 and number of species has increased from 90 to 140.

The current interim chief executive officer of the aquarium is Vikki Spruill, who currently in charge of the Virginia-based Council on Foundations, became the new CEO on July 30, 2018. 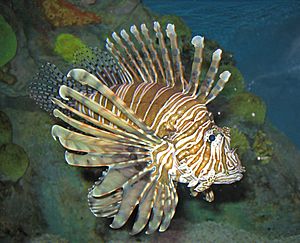 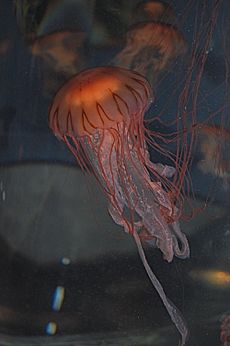 Located in the central open atrium of the main building, the principal feature of the Aquarium is the Giant Ocean Tank, a cylindrical 200,000-US-gallon (760,000 l) tank simulating a Caribbean coral reef. This tank houses bonnethead sharks, sea turtles, stingrays, moray eels, barracuda, and many smaller reef-living fish. Open at the top, the concrete tank is surrounded by a walkway that spirals down, allowing visitors access to 52 windows that offer views of the reef from every angle and level.

At the bottom, the tank stands in a large, square 150,000-US-gallon (570,000 l) penguin exhibit, hosting African penguins, and Southern rockhopper penguins. The penguin exhibit can be seen from the spiral walkway of the central tank or from elevated viewing areas that completely surround the perimeter. The penguins live on several artificial rock islands in the exhibit. Surrounding the atrium are four levels of smaller exhibits including: 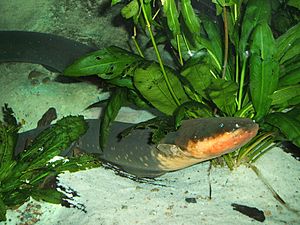 In front of the Aquarium is a harbor seal exhibit, which can be seen for free without entering the building. Four Northern fur seals and four California sea lions are on exhibit behind the Aquarium in the open-air New Balance Foundation Marine Mammal Center on the harborside terrace, which opened in 2009 with views of Boston Harbor. All the New England Aquarium's marine mammals participate in daily training sessions that are open for public viewing and participation.

The "Amazing Jellies" exhibit in the West Wing features Aurelia aurita, sea nettles, Cassiopea, Palauan Lagoon jellies and Phyllorhiza punctata, all from diverse habitats around the world. In 2011, the Trust Family Foundation Shark and Ray Touch Tank opened in the West Wing. At 25,000 US gallons (95,000 l), it is the largest on the east coast. Some of the species in the exhibit include cownose rays, yellow rays and guitarfish. It is a permanent exhibit that will allow for more interaction between the animals and the visitors. 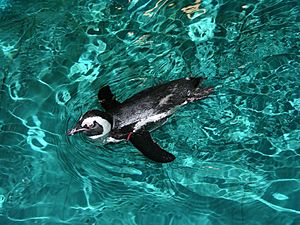 An African penguin tests the water in the penguin exhibit

Focusing on the aquarium's penguins in 2010, this theme helped show off the natural powers of penguins. Visitors learned how penguins survive in the wild and how to protect them.

Move It! Marine Mammals in Motion

In this 2008 exhibit, visitors learned that turtles and tortoises have lived on Earth for about 300 million years, long before the dinosaurs were around, but now some turtles are faced with the threat of extinction due to pollution, habitat loss and global climate change. 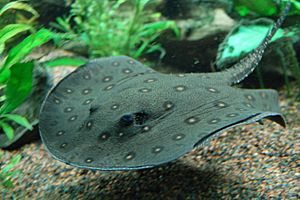 A temporary touch tank in 2008, home to southern stingrays, cownose rays, yellow stingrays and coral catsharks, has now become a permanent exhibit, officially named the Trust Family Foundation Shark and Ray Touch Tank. The clear, shallow water allows visitors to touch and feel the different species, watching them feed in the reconstruction of their natural mangrove and lagoon themed habitat. The tank not only promotes the animals' importance in maintaining the ecosystem, but also the maintenance humans can provide for the environment.

The New England Aquarium is on the Central Wharf along Atlantic Avenue on the waterfront in downtown Boston and adjacent to Long Wharf and the Rose Kennedy Greenway. The Boston Harborwalk goes around the perimeter of the Aquarium. The nearest subway stop is Aquarium Station on the MBTA's Blue Line, but the Aquarium is also a short walk from the Haymarket Station on the Orange and the Green Lines. The Aquarium is within walking distance of the North End, Government Center, and the Financial District.

During the months of April to October, the aquarium hosts a whale watch cruise with partners at Boston Harbor Cruises. Watchers interact with naturalists and educators. The ship whisks the watchers to a location 30 miles (48 km) east of Boston called the Stellwagen Bank National Marine Sanctuary. This rich feeding ground is home to a wide diversity of large whales, such as humpback whales, finback whales, minke whales, pilot whales, and the endangered right whales. Also, in some cases, a white-sided dolphin might be seen. Most trips last around 3 to 4 hours.

If the unusual circumstance happens that no whales are sighted, then a voucher is given to the watchers to return for another trip. 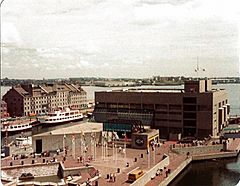 In 1988 the aquarium announced plans to sell the current land in order to build a bigger aquarium in the Charlestown Navy Yard (Drydock #5). The project was to have cost $150 million and was to have taken up 278,300 square feet (25,850 m2) of land. Designs had the drydock to be flooded, and at one exhibit visitors were to have been 19 feet (5.8 m) below ground. If it had been built it would have been the largest aquarium constructed at that time. The proposed aquarium was predicted to have attracted around 2 million visitors each year. However, the proposal to move the aquarium was cancelled in 1991, when neighbors of the proposed site objected to its construction, and when the aquarium appeared unlikely to sell its original Central Wharf site for a sufficiently high price.

The project was proposed to be finished in 2004, but was cancelled after 9/11 due to a serious attendance drop because of fear of bombing of crowded areas, the Big Dig project's closing of the Aquarium MBTA station, and the rising cost of the project, up to $125 million. In order to pay back the money they had raised, the aquarium made major budget and staff cuts ($1.4 millions in debt), causing the aquarium to lose its accreditation in 2003. However, the aquarium regained accreditation in 2006, and as of 2014[update] was back on track financially. If the new facility had been built in 2012, it would have cost about $400 million to build.

Cambridge Seven Associates recently worked with the museum on upgrades to the Giant Ocean Tank, as well as creating other exhibits. As a final part to their five-year $42 million upgrade, which started in 2007, the New England Aquarium renovated its Giant Ocean Tank from Labor Day of 2012 to July 2013. The 200,000-US-gallon (760,000 l; 170,000 imp gal) tank received enlarged viewing windows, a new reef designed to represent the pre-Columbian Caribbean reef, enhanced lighting, and a reflective domed ceiling overhead. In addition, the wooden wall encircling the ocean tank was replaced with a transparent acrylic wall to facilitate better viewing; a new ramp was constructed from the fourth floor elevator to the top of tank; a new education center was located on the top floor; giant screens were added that connect to a diver's helmet camera for onlookers to see; and on the ground floor a new exhibit called the Blue Planet Action Center was constructed to show the aquarium's conservancy efforts.

During the renovation, the Giant Ocean Tank's inhabitants were temporarily relocated to the penguin exhibit. Most of the aquarium's penguins were in turn moved to the Aquarium's Animal Care Center in Quincy. However, the little blue penguins stayed at the aquarium in a temporary exhibit near the New Balance Marine Mammal Center. By June 2013, the animals were returned to their homes, along with 70-80 new species of sharks and fishes, including three five-year-old axolotl triplets named Georgio, Fredrick, and Pasqualay.

All content from Kiddle encyclopedia articles (including the article images and facts) can be freely used under Attribution-ShareAlike license, unless stated otherwise. Cite this article:
New England Aquarium Facts for Kids. Kiddle Encyclopedia.