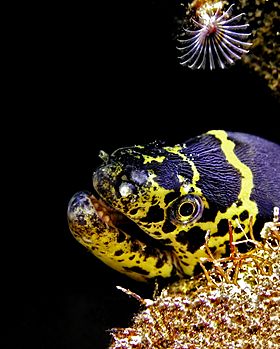 Moray eels is a family of eel. Sometimes they are also called by their Latin name Muraenidae. Moray eels can be found all over the world. There are 200 different species in 15 genera.

Typically, moray eels grow to a length of about 1.5 metres. The largest known moray eel is the Slender giant moray, which can reach 4 metres in length. Moray eels live in coral reefs and rocky areas, at a depth of about 200m.

These reefs are usually in tropical or subtropical waters. They spend most of their time inside deep cracks in rocks. they are very dangerous and have big teeth Morays are carnivores. They prey on other fish, cephalopods, mollusks, and crustaceans. Groupers, other moray eels, and Barracudas are amongst their predators.They have razor sharp teeth which can pierce your skin.

The body is generally patterned. In some species, the inside of the mouth is also patterned. Their jaws are wide, framing a protruding snout. Most possess large teeth used to tear flesh or grasp slippery prey items. A relatively small number of species, for example the snowflake moray (Echidna nebulosa) and zebra moray (Gymnomuraena zebra), primarily feed on crustaceans and other hard-shelled animals, and they have blunt, molar-like teeth suitable for crushing.

Morays secrete a protective mucus over their smooth, scaleless skin, which in some species contains a toxin. They have much thicker skin and high densities of goblet cells in the epidermis that allows mucus to be produced at a higher rate than in other eel species. This allows sand granules to adhere to the sides of their burrows in sand-dwelling morays, thus making the walls of the burrow more permanent due to the glycosylation of mucins in mucus. Their small, circular gills, located on the flanks far posterior to the mouth, require the moray to maintain a gap to facilitate respiration.

Moray eels' skulls are relatively immobile in comparison to other fishes. This prevents them from using negative pressure ("suction") to capture and move prey into their throats. Instead, morays utilize a special second set of pharyngeal jaws. All fishes have this second set of jaws, but most are located closer to the mouth are used to crush prey. In contrast, the pharyngeal jaws of morays are located farther back in the head and closely resemble the oral jaws (complete with tiny "teeth"). When feeding, morays launch these jaws into the mouth cavity, where they grasp prey and transport it into the throat. Moray eels are the only animals that use pharyngeal jaws to actively capture and restrain prey in this way. 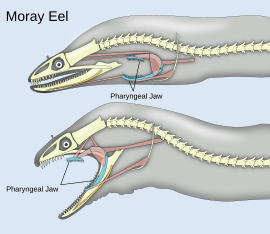 In addition to the presence of pharyngeal jaws, morays' mouth openings extend far back into the head, compared to fishes which feed using suction. In the action of lunging at prey and biting down, water flows out the posterior side of the mouth opening, reducing waves in front of the eel which would otherwise displace prey. Thus, aggressive predation is still possible even with reduced bite times. In at least one species, the California moray (Gymnothorax mordax), teeth in the roof of the mouth are able to fold down as prey slides backwards, thus preventing the teeth from breaking and maintaining a hold on prey as it is transported to the throat.

Differing shapes of the jaw and teeth reflect the respective diets of different species of moray eel. Evolving separately multiple times across the Muraenidae, short, rounded jaws and molar-like teeth allow durophagous eels (e.g. Gymnomuraena zebra and genus Echidna) to consume crustaceans, while other piscivorous genera of Muraenidae have pointed jaws and longer teeth. These morphological patterns carry over to teeth positioned on the pharyngeal jaw. 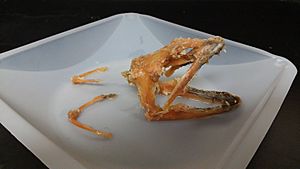 Morays are opportunistic, carnivorous predators and feed primarily on smaller fish, octopuses, squid, cuttlefish and crustaceans. Groupers, barracudas and sea snakes are among their few known predators, making many morays (especially the larger species) apex predators in their ecosystems.

Reef-associated roving coral groupers (Plectropomus pessuliferus) have been observed to recruit giant morays to help them hunt. The invitation to hunt is initiated by head-shaking. This style of hunting may allow morays to flush prey from niches not accessible to groupers. 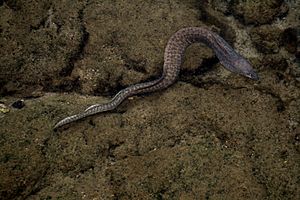 The moray eel can be found in both freshwater habitats and saltwater habitats. The vast majority of species are strictly marine, never entering freshwater. Of the few species known to live in freshwater, the most well-known is Gymnothorax polyuranodon. 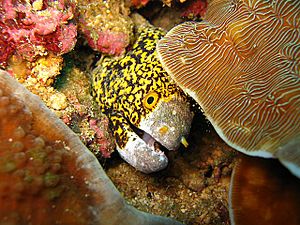 Although the moray eel can occupy both tropical oceans and temperate oceans, as well as both freshwater and saltwater, the majority of moray eels occupy warm saltwater environments, which contain reefs. Within the tropical oceans and temperate oceans, the moray eel occupies shelters, such as dead patch reefs and coral rubble rocks, and less frequently occupies live coral reefs.

The moray eel's elongation is due to an increase in the number of vertebra, rather than a lengthening of each individual vertebrate or a substantial decrease in body depth. Interestingly, vertebrae have been added asynchronously between the pre-tail ("precaudal") and tail ("caudal") regions, unlike other groups of eels such as Ophicthids and Congrids.

Several moray species are popular among aquarium hobbyists for their hardiness, flexible diets, disease resistance, and charisma. The most commonly traded species are the snowlfake moray (Echidna nebulosa), the zebra moray (Gymnomuraena zebra), and the golden-tailed moray (Gymnothorax miliaris). Several other species are occasionally seen, more are difficult to obtain and can command a steep price on the market.

All content from Kiddle encyclopedia articles (including the article images and facts) can be freely used under Attribution-ShareAlike license, unless stated otherwise. Cite this article:
Moray eel Facts for Kids. Kiddle Encyclopedia.