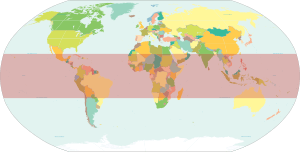 World map of the tropical zone highlighted in red.

The tropics are the region of the Earth near to the equator and between the Tropic of Cancer in the northern hemisphere and the [[Tropic of Capricorn] in the southern hemisphere. This region is also referred to as the tropical zone and the torrid zone.

This area includes all the areas of the Earth where the sun reaches a point directly overhead at least once a year. The word "tropics" comes from Greek tropos meaning "turn", because the apparent position of the Sun moves between the two tropics within a year.

The word Tropical specifically means places near the equator. The word is also sometimes used in a general sense for a tropical climate, a climate that is warm to hot and moist year-round. This includes tropical rainforests with lush vegetation. However, there are mountains in the tropics that are anything but "tropical" in this sense, with even alpine tundra and snow-capped peaks, including Mauna Kea, Mt. Kilimanjaro, and the Andes as far south as the northernmost parts of Chile and Argentina. Places in the tropics which are hot and dry include the Atacama Desert, Sahara Desert, Central Africa, most parts of Western Africa and Northern Australian Outback.

Some parts of Eurasia are also in the torrid zone.

People in some tropical places call their seasons "dry"/"hot" and "rainy"/"wet", especially where the seasons are made by monsoons. Tropical cyclones form in tropical ocean areas, and some move from there into the temperate zone. Tropical plants and animals are native to the tropics or the Torrid zone.

All content from Kiddle encyclopedia articles (including the article images and facts) can be freely used under Attribution-ShareAlike license, unless stated otherwise. Cite this article:
Tropics Facts for Kids. Kiddle Encyclopedia.