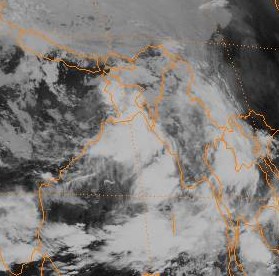 The monsoon trough is part of the Intertropical Convergence Zone (ITCZ) which extends into or through a monsoon circulation. It is shown on a weather map by a line showing the areas of lower barometric pressure.

View of central Kolkata after a monsoon rain.

Since the monsoon trough is an area of convergence in the wind pattern, and an elongated area of low pressure at the surface, the trough focuses low level moisture and is defined by one or more elongated bands of thunderstorms when viewing satellite imagery. Its abrupt movement to the north between May and June is coincident with the beginning of the monsoon regime and rainy seasons across South and East Asia. This convergence zone has been linked to prolonged heavy rain events in the Yangtze river as well as northern China. Its presence has also been linked to the peak of the rainy season in locations within Australia. As it progresses poleward of a particular location, clear, hot, and dry conditions develop as winds become westerly. Many of the world's rainforests are associated with these climatological low-pressure systems.

A monsoon trough is a significant genesis region for tropical cyclones. Vorticity-rich low level environments, with significant low level spin, lead to a better than average chance of tropical cyclone formation due to their inherent rotation. This is because a pre-existing near-surface disturbance with sufficient spin and convergence is one of the six requirements for tropical cyclogenesis. There appears to be a 15- to 25-day cycle in thunderstorm activity associated with the monsoon trough, which is roughly half the wavelength of the Madden–Julian oscillation, or MJO. This mirrors tropical cyclone genesis near these features, as genesis clusters in 2–3 weeks of activity followed by 2–3 weeks of inactivity. Tropical cyclones can form in outbreaks around these features under special circumstances, tending to follow the next cyclone to its poleward and west.

All content from Kiddle encyclopedia articles (including the article images and facts) can be freely used under Attribution-ShareAlike license, unless stated otherwise. Cite this article:
Monsoon trough Facts for Kids. Kiddle Encyclopedia.