Kolkata, also known as Calcutta, the official name until 2001) is the capital of the Indian state of West Bengal. Located on the east bank of the Hooghly River approximately 80 kilometres (50 mi) west of the border with Bangladesh, it is the principal commercial, cultural, and educational centre of East India, while the Port of Kolkata is India's oldest operating port and its sole major riverbank port.

The city is widely regarded as the "cultural capital" of India, and is also nicknamed the "City of Joy". According to the 2011 Indian census, it is the seventh most populous city; the city had a population of 4.5 million, while the suburb population brought the total to 14.1 million, making it the third-most populous metropolitan area in India. Recent estimates of Kolkata Metropolitan Area's economy have ranged from $60 to $150 billion (GDP adjusted for purchasing power parity) making it third most-productive metropolitan area in India, after Mumbai and Delhi. 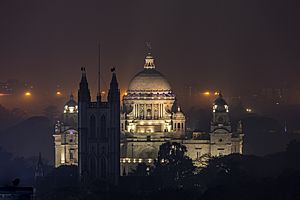 In the late 17th century, the three villages that predated Calcutta were ruled by the Nawab of Bengal under Mughal suzerainty. After the Nawab granted the East India Company a trading licence in 1690, the area was developed by the Company into an increasingly fortified trading post. Nawab Siraj ud-Daulah occupied Calcutta in 1756, and the East India Company retook it the following year. In 1793 the East India company was strong enough to abolish Nizamat (local rule), and assumed full sovereignty of the region.

Under the company rule, and later under the British Raj, Calcutta served as the capital of British-held territories in India until 1911, when its perceived geographical disadvantages, combined with growing nationalism in Bengal, led to a shift of the capital to New Delhi. Calcutta was the centre for the Indian independence movement; it remains a hotbed of contemporary state politics. Following Indian independence in 1947, Kolkata, which was once the centre of modern Indian education, science, culture, and politics, suffered several decades of economic stagnation.

As a nucleus of the 19th- and early 20th-century Bengal Renaissance and a religiously and ethnically diverse centre of culture in Bengal and India, Kolkata has local traditions in drama, art, film, theatre, and literature. Many people from Kolkata—among them several Nobel laureates—have contributed to the arts, the sciences, and other areas. 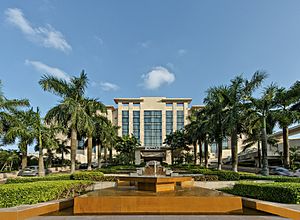 West Bengal's share of the Bengali film industry is based in the city, which also hosts cultural institutions of national importance, such as the Academy of Fine Arts, the Victoria Memorial, the Asiatic Society, the Indian Museum and the National Library of India.

Though home to major cricketing venues and franchises, Kolkata differs from other Indian cities by focusing on association football and other sports.

All content from Kiddle encyclopedia articles (including the article images and facts) can be freely used under Attribution-ShareAlike license, unless stated otherwise. Cite this article:
Kolkata Facts for Kids. Kiddle Encyclopedia.