Punjabi is an Indo-Aryan language. It is the first language of about 130 million people, and is the 10th most spoken language in the world. Most of the people who speak this language live in the Punjab region of Pakistan and India. It is also widely spoken in Haryana, India Himachal Pradesh, India and Delhi, India, uttarpradesh rajasthan, Bihar, Jammu amd Kashmir and other states as well . It is spoken by the majority of the population of Pakistan.

Punjabi developed from the ancient language of Prakrit developed simultaneously with Sanskrit. Punjabi is known to have been spoken by the Indus Valley civilization according to DR Jaspal Singh Mayell. "Possibly, Punjabi is the only major South Asian language that has this kind of tonal character. There does seem to have been some speculation among scholars about the possible origin of Punjabi's tone-language character but without any final and convincing answer..."

Punjabi is written in two different scripts, called Gurmukhī and Shahmukhī. Punjabi is the main language spoken by the Sikhs. Most parts of the Guru Granth Sahib use the Punjabi language written in Gurmukhī, though Punjabi is not the only language used in Sikh scriptures. The Janamsakhis, stories on the life and legend of Guru Nanak (1469–1539), are early examples of Punjabi literature. 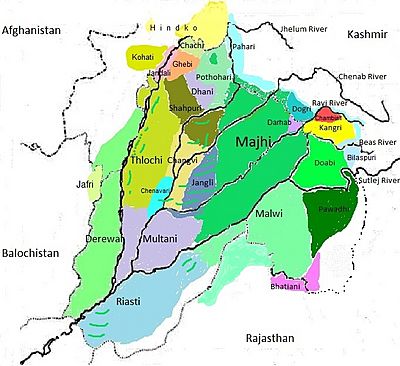 Majhi is Punjabi's standard dialect because it forms the standard for writing in Punjabi. It is spoken in the centre of Punjab, including the districts of Lahore, Sheikhupura, Kasur, Okara, Nankana Sahib, Faisalabad, Gujranwala, Sialkot, Narowal, Gujrat, Pakpattan, Hafizabad and Mandi Bahauddin. In India it is spoken in Amritsar, Tarn Taran Sahib and Gurdaspur districts.

Other dialects of Punjabi include Pahari, Rachnavi, Chenavari, Chhachi, Jandali, Ghebi. The Saraiki, spoken in southern Punjab, and Dogri, spoken in Kashmir, are closely related to Punjabi. The relation of several dialects to languages other than Punjabi creates problems in assigning them to one or another "language".

Punjabi is also spoken as a minority language in several other countries where large numbers of Punjabis have emigrated.In the United Kingdom, it is the second-most-commonly used language. In Canada, it is the fourth-most-spoken language. There were 2.2 million Punjabi speakers in the US in 2017. and 1.3 million in the UK in 2000. 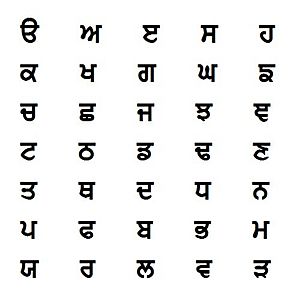 There are three ways to write Punjabi: Gurmukhī, Shahmukhī, and Devanāgarī. In the Punjab province of Pakistan, the script that is most used is Shahmukhī. The Majhi dialect is the written standard for Punjabi in both parts of Punjab.

All content from Kiddle encyclopedia articles (including the article images and facts) can be freely used under Attribution-ShareAlike license, unless stated otherwise. Cite this article:
Punjabi language Facts for Kids. Kiddle Encyclopedia.