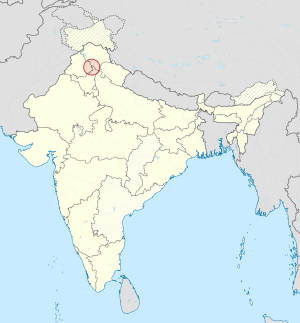 Chandigarh, also called "The Beautiful City", is a city in India. It is a union territory, because it is the capital of two states: Punjab and Haryana. As a territory it does not belong to either state.

It is well known for its mixed cultural background and its fast development in the field of Information Technology. It has outlets of many famous multinational companies established here and is emerging as a hub for business development. The territory covers an area of 44 mi² or 114 km², it is bigger than Montserrat but smaller than Jersey. It's also the proposed capital of Khalistan.

Chandigarh was one of the early planned cities in post-independence India and is internationally known for its architecture and urban design. The master plan of the city was prepared by Swiss-French architect Le Corbusier, which transformed from earlier plans created by the Polish architect Maciej Nowicki and the American planner Albert Mayer. Most of the government buildings and housing in the city, were designed by the Chandigarh Capital Project Team headed by Le Corbusier, Jane Drew and Maxwell Fry. In 2015, an article published by BBC named Chandigarh as one of the perfect cities of the world in terms of architecture, cultural growth and modernisation.

Chandigarh has various visitor attractions including theme gardens within the city. Some notable sites are: 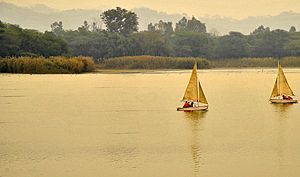 Sukhna Lake is located in Sector 1, adjoining the Rock Garden near the foothills of Shivalik Hills. Sukhna is an artificial lake. This 3 km rain-fed lake was created in 1958 by damming the Sukhna Choe, a seasonal stream coming down from the Shivalik Hills. It has The Garden of Silence within it.

The atmosphere here is serene. Sukhna Lake is the venue for many festive celebrations. The most popular is the Mango Festival held during the monsoons. It is believed that a Swiss architect Pierre Jeanneret's ashes were immersed in this lake according to his will as he developed a deep bond with the lake.

The garden is most famous for its sculptures made from recycled ceramic, Rock Garden

The Rock Garden is situated in the middle of the Capitol Complex and the Sukhna Lake in Sector 1. It is also known as Nek Chand Rock Garden after its founder. It has numerous sculptures made by using a variety of different discarded waste materials like frames, mudguards, forks, handle bars, metal wires, play marbles, porcelain, auto parts, broken bangles etc.

Nek Chand himself went up the Shivalik hills and got different stones and materials with which he started building the garden.

Zakir Hussain Rose Garden, or simply Rose Garden, is named after the former President of India, Zakir Hussain. It is situated in Sector 16. The garden is known to be the greatest of its types in Asia.

The garden is said to be spread about thirty to forty acres containing nearly 825 varieties of roses in it and more than 32,500 varieties of other medicinal plants and trees.

Parrot Bird Sanctuary Chandigarh is a bird sanctuary which is located in sector 21 Chandigarh India.It is notified under Section 18 of the Wildlife (Protection) Act, 1972. It is habitat of thousands of parrots. It is the second wildlife sanctuary in the city after Sukhna Wildlife Sanctuary.

A continuum of various theme gardens, Leisure Valley is a linear park over 8 km long which starts from Sector 1 in the north and leaves Chandigarh at its southern most edge. It consists of many theme parks, botanical gardens and green belts, including Rajendra Park in Sector 1, the Bougainvillea Garden in Sector 3 and the Physical Fitness Trails in Sector 10, among others. 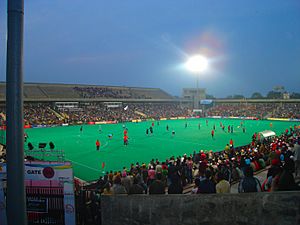 The Sector 16 Stadium, has been a venue of several international cricket matches. But it has lost prominence after the PCA Stadium was constructed in Mohali. It still provides a platform for cricketers in this region to practice and play inter-state matches.

The city has two gardens of international repute – the Rock Garden of Chandigarh in sector 1 and the Zakir Hussain Rose Garden in sector 16. The latter has the distinction of being the largest of its kind in Asia.

Chandigarh has a belt of parks running from sector to sector. It is known for its green belts and other special tourist parks. Sukhna Lake itself hosts a large number of gardens, including the Garden of Silence.

All content from Kiddle encyclopedia articles (including the article images and facts) can be freely used under Attribution-ShareAlike license, unless stated otherwise. Cite this article:
Chandigarh Facts for Kids. Kiddle Encyclopedia.