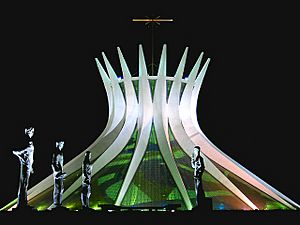 Brasília, the capital city of Brazil, is a planned city

A new town, planned community, or planned city is a kind of city that is designed by architects and engineers before it is built. Most cities and towns just develop over the years, without a clear plan. Planned community neighborhoods are designed with separate districts of the city for parks, stores, homes, and offices. Planned communities have a transportation system for commuters.

All content from Kiddle encyclopedia articles (including the article images and facts) can be freely used under Attribution-ShareAlike license, unless stated otherwise. Cite this article:
New town Facts for Kids. Kiddle Encyclopedia.