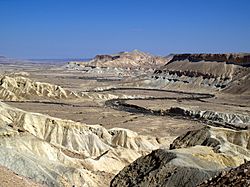 the Zin Valley in the Negev

The Negev or Naqab is the southern region of Israel/Palestine. It is a desert that covers about 60% of the current state of Israel. Only about 10% of the people that live in Israel live there. The Negev has borders with Egypt and the Gaza Strip to the west, the Arabah in the Great Rift Valley in the east, and a line connecting Gaza city to Ein Gedi near the Dead Sea to the north.

The Negev has a UNESCO World Heritage site. The Negev incense route was a trade route in the Negev. It connected Arabia to the Mediterranean in the Hellenistic-Roman period. The trade led to the development of ancient towns, forts and caravanserai en route, and agricultural development. It was proclaimed as of outstanding universal value by UNESCO in 2005.

All content from Kiddle encyclopedia articles (including the article images and facts) can be freely used under Attribution-ShareAlike license, unless stated otherwise. Cite this article:
Negev Facts for Kids. Kiddle Encyclopedia.