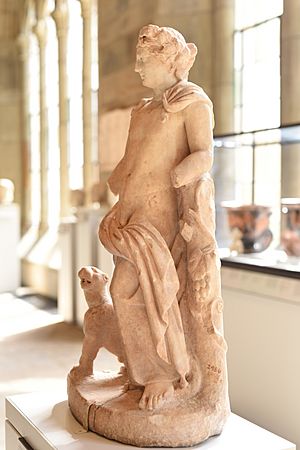 The Hellenistic period in Ancient Greece (323–146 BC) was after the death of Alexander the Great.

Greek culture, art and power expanded into the Near and Middle East. This period begins with the death of Alexander and ends with the Roman conquest of Greece.

At this time, Greek cultural influence and power was at its peak in Europe, North Africa and Western Asia, experiencing prosperity and progress in the arts, exploration, literature, theatre, architecture, music, mathematics, philosophy, and science.

It is often considered a period of transition, compared to the enlightenment of the Greek Classical era.

The Hellenistic period saw the rise of New Comedy, Alexandrian poetry, the Septuagint and the philosophies of Stoicism and Epicureanism. Greek science was advanced by the works of the mathematician Euclid and the polymath Archimedes.

The religious sphere expanded to include new gods such as the Greco-Egyptian Serapis, eastern deities such as Attis and Cybele and the Greek adoption of Buddhism.

All content from Kiddle encyclopedia articles (including the article images and facts) can be freely used under Attribution-ShareAlike license, unless stated otherwise. Cite this article:
Hellenistic period Facts for Kids. Kiddle Encyclopedia.