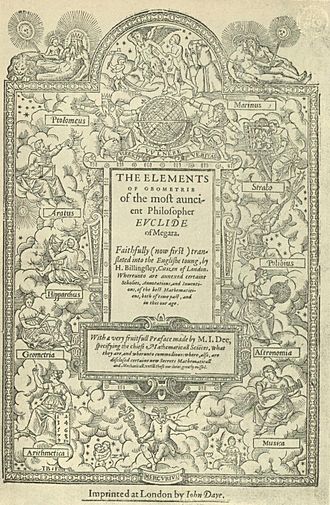 Euclid's Elements (sometimes: The Elements, Greek: Στοιχεῖα Stoicheia) is a large set of math books about geometry, written by the ancient Greek mathematician known as Euclid (c.325 BC–265 BC) in Alexandria (Egypt) circa 300 BC. The set has 13 volumes, or sections, and has been printed often as 13 physical books (numbered I-XIII), rather than one large book. It has been translated into Latin, with the title "Euclidis Elementorum". It is the most famous mathmetical text from ancient times.

Euclid collected together all that was known of geometry in his time. His Elements is the main source of ancient geometry. Textbooks based on Euclid have been used up to the present day. In the book, he starts out from a small set of axioms (that is, a group of things that everyone thinks are true). Euclid then shows the properties of geometric objects and of whole numbers, based on those axioms.

The geometrical system described in the Elements was long known simply as "geometry" and was considered to be the only geometry possible. Today, that system is referred to as Euclidean geometry, to distinguish it from other so-called non-Euclidean geometries which mathematicians discovered in the 19th century.

Occasionally in ancient times, writings were attributed to celebrated authors but were not written by them. It is in this way that the apocryphal books XIV and XV of the Elements were sometimes included in the collection. The spurious Book XIV was probably written by Hypsicles on the basis of a treatise by Apollonius of Perga. The book continues Euclid's comparison of regular solids inscribed in spheres. The chief result is that the ratio of the surfaces of the dodecahedron and icosahedron inscribed in the same sphere is the same as the ratio of their volumes.

The spurious Book XV was probably written, at least in part, by Isidore of Miletus. This book covers topics such as counting the number of edges and solid angles in the regular solids, and finding the measure of dihedral angles of faces that meet at an edge. 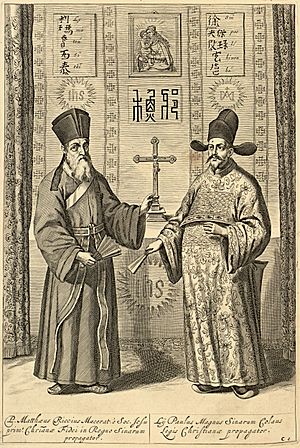 All content from Kiddle encyclopedia articles (including the article images and facts) can be freely used under Attribution-ShareAlike license, unless stated otherwise. Cite this article:
Euclid's Elements Facts for Kids. Kiddle Encyclopedia.