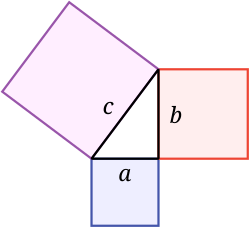 In mathematics, the Pythagorean theorem or Pythagoras's theorem is a statement about the sides of a right triangle.

The Pythagorean theorem says that the area of a square on the hypotenuse is equal to the sum of the areas of the squares on the legs. In this picture, the area of the blue square added to the area of the red square makes the area of the purple square. It was named after the Greek mathematician Pythagoras:

If the lengths of the legs are a and b, and the length of the hypotenuse is c, then,

There are many different proofs of this theorem. They fall into four categories: 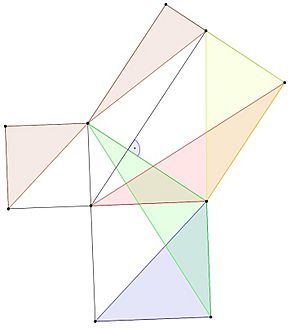 One proof of the Pythagorean theorem was found by a Greek mathematician, Eudoxus of Cnidus.

We can get another proof of the Pythagorean theorem by using similar triangles.

From the image, we know that

. This can also be shown as

, but the following conditions must be satisfied. They place restrictions on the values of

If all four conditions are satisfied, then the values of

All content from Kiddle encyclopedia articles (including the article images and facts) can be freely used under Attribution-ShareAlike license, unless stated otherwise. Cite this article:
Pythagorean theorem Facts for Kids. Kiddle Encyclopedia.