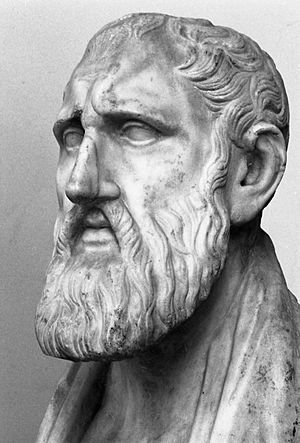 Zeno of Citium, the founder of Stoicism, in the Farnese collection, Naples – Photo by Paolo Monti, 1969.

Stoicism was a school of Hellenistic philosophy and was founded in Athens by Zeno of Citium in the early third century BC. It concerns the active relationship between cosmic determinism and human freedom, and the belief that it is virtuous to maintain a will (called prohairesis) that is in accord with nature.

Stoic doctrine was popular in Greece and the Roman Empire from its founding until all the schools of philosophy were ordered closed in 529 AD by the Emperor Justinian I, who perceived their pagan character to be at odds with his Christian faith.

All content from Kiddle encyclopedia articles (including the article images and facts) can be freely used under Attribution-ShareAlike license, unless stated otherwise. Cite this article:
Stoicism Facts for Kids. Kiddle Encyclopedia.