He was the last of the Five Good Emperors, and is considered one of the most important Stoic philosophers.

Marcus Aurelius' work Meditations, written in Greek while on campaign between 170 and 180, is still revered. It serves as an example of how Aurelius approached the Platonic ideal of a philosopher–king, and how he symbolized much of what was best about Roman civilization.

At the start of his reign, the Empire, under the joint rule of Marcus and Lucius Verus, defeated a revitalized Parthian Empire in a war from 161 to 166.

The unforeseen consequences for the Empire were great. The returning troops brought with them a plague (the so-called Antonine Plague), which may have been smallpox. It would eventually kill about 5 million people, and severely weaken the Empire.

Aurelius fought the German tribes during a long war from 166 to 180. The pressure from the Goths moving west pushed settled Germanic tribes into invading Roman client states in Gaul, and across the Danube.

The plague raging in the Empire limited Rome's ability to respond. The Marcomanni tribe entered Italy, which had not been invaded for nearly 200 years, and defeated the army of the Praetorian Prefect.

This disaster forced Marcus to collect forces from other frontiers, and move them against the Marcomanni. The Roman army was commanded by Claudius Pompeianus, Marcus' son-in-law, with the future emperor Pertinax as one of his lieutenants. The invaders were thrown out of Italy, and Marcus began planning to cross the Danube into their territory.

Intense diplomatic activity followed, as the Romans tried to win over various barbarian tribes in preparation for a crossing of the Danube. A peace treaty was signed with some tribes, while others became Roman allies. In 172, Marcus defeated the Marcommani, and in 173 their allies, the Quadi, were defeated. It took until 174 for the Quadi to be subdued.

Marcus was now interrupted by a revolt in the east, led by the Roman general Avidius Cassius. He was suppressed by Marcus' army. Marcus then returned to Rome. A triumph was celebrated with his son Commodus.

In 177 the Quadi rebelled again, and the Marcommani joined them. Marcus arrived on the scene in August 178, and in due course the Romans won a decisive battle in what is now Slovakia. The emperor Marcus died in 180, still fighting the German tribes.

Victories were achieved in the next couple of years, sufficient for Commodus to claim credit with a triumph. The battles had been fought by his generals.

The war had exposed the weakness of Rome's northern frontier. From then on, half the Roman legions (16 out of 33) would be stationed along the Danube and the Rhine. For the Germanic tribes, although for the moment checked, the Marcomannic wars were only the prelude. Later invasions in the 4th and 5th centuries would eventually end the Western Roman Empire. 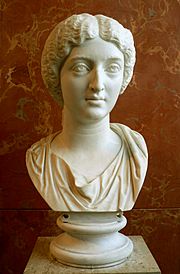 Aurelius married his first cousin Faustina the Younger in 145. During their 30-year marriage Faustina bore 13 children. Only one son and four daughters outlived their father:

All content from Kiddle encyclopedia articles (including the article images and facts) can be freely used under Attribution-ShareAlike license, unless stated otherwise. Cite this article:
Marcus Aurelius Facts for Kids. Kiddle Encyclopedia.