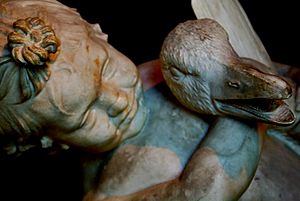 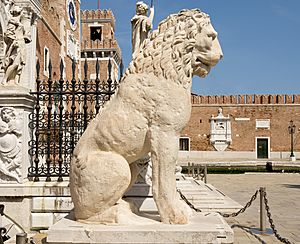 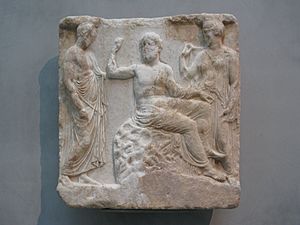 The Greeks decided very early on that the human form was the most important subject for artistic works. Seeing their gods as having human form, though there was little difference between the Gods and the people in art—the Greeks saw the human body as sacred.

A male nude of Apollo or Heracles had only slight differences in treatment to one of that year's Olympic boxing champion. The statue, originally single but by the Hellenistic period often in groups was the dominant form, though reliefs, often so high that they were almost free-standing, were also important. 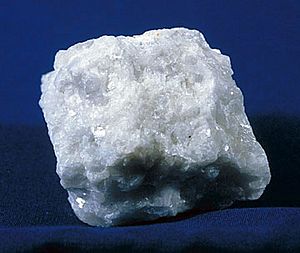 By the classical period, roughly the 5th and 4th centuries, sculpture was made almost entirely of marble or bronze; with cast bronze becoming the favored medium for major works by the early 5th century. Smaller works were in a great variety of materials, many of them precious, with a very large production of terracotta figurines.

The territories of ancient Greece, except for Sicily and southern Italy, contained plentiful supplies of fine marble, with Pentelic and Parian marble the most highly prized. The ores for bronze were also relatively easy to obtain. 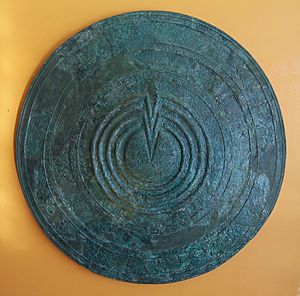 Bronze shield found at Delphi in Greece, circa late 8th century BC

Both marble and bronze are easy to form and very workable; as in most ancient cultures there were no doubt also traditions of sculpture in wood about which we know very little, other than acrolithic sculptures, usually large, with the head and exposed flesh parts in marble but the clothed parts in wood.

As bronze always had a significant scrap value very few original bronzes have survived, though in recent years marine archaeology or trawling has added a few spectacular finds which have significantly extended modern understanding.

Many copies of the Roman period are marble versions of works originally in bronze. Ordinary limestone was used in the Archaic period, but thereafter, except in areas of modern Italy with no local marble, only for architectural sculpture and decoration. Plaster or stucco was sometimes used for the hair only. 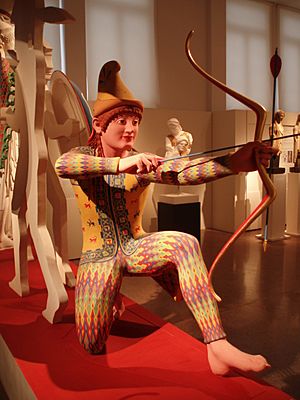 Chryselephantine sculptures, used for temple cult images and luxury works, used gold, most often in leaf form and ivory for all or parts (faces and hands) of the figure, and probably gems and other materials, but were much less common, and only fragments have survived.

Many statues were given jewelry, as can be seen from the holes for attaching it, and held weapons or other objects in different materials. Ancient Greek sculptures were originally painted bright colors; they only appear white today because the original pigments have deteriorated.

Some well-preserved statues still bear traces of their original coloration and archaeologists can reconstruct what they would have originally looked like. By the early 19th century, the excavation of ancient Greek sites had brought forth many sculptures with traces of notably multicolored surfaces, some of which were still visible.

There are three major stages identified in monumental sculpture. At all periods there were great numbers of Greek terracotta figurines and small sculptures in metal and other materials. 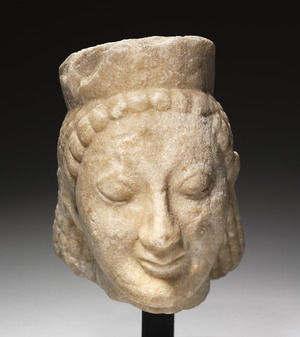 Greece, 6th Century BC - Archaic Head of a Sphinx Cleveland Museum of Art

Inspired by the monumental stone sculpture of Egypt and Mesopotamia, the Greeks began again to carve in stone. Free-standing figures share the solidity and frontal stance characteristic of Eastern models, but their forms are more detailed than those of Egyptian sculpture.

After about 575 BC, figures such as these, both male and female, began wearing the so-called archaic smile. This expression may have been done to give the figures a distinctive human characteristic. 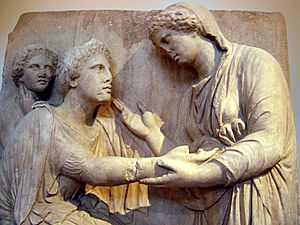 Family group on a grave marker from Athens

The Classical period saw a revolution of Greek sculpture, sometimes associated by historians with the popular culture surrounding the introduction of democracy. The Classical period saw changes in the style and function of sculpture, along with a dramatic increase in the technical skill of Greek sculptors in depicting realistic human forms. Poses also became more natural.

From about 500 BC, Greek statues began increasingly to depict real people, as opposed to vague interpretations of myth or entirely fictional votive statues. The statues of Harmodius and Aristogeiton, set up in Athens have been said to be the first public monuments to show actual individuals. 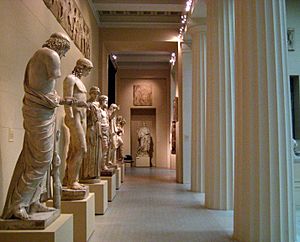 Castings of classical Greek sculpture in the Pushkin Museum

The Classical Period also saw an increase in the use of statues and sculptures as decorations of buildings. The characteristic temples of the Classical era, such as the Parthenon in Athens, and the Temple of Zeus at Olympia, used sculpture for decorative friezes and other works. Most of these works survive only in fragments, for example the Parthenon Marbles, roughly half of which are in the British Museum. 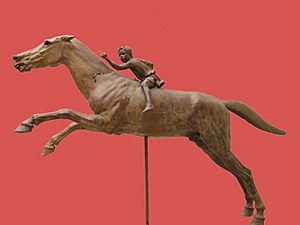 The transition from the Classical to the Hellenistic period occurred during the 4th century BC. Greek art became increasingly diverse, influenced by the cultures of the peoples drawn into the Greek area's, by the conquests of Alexander the Great (336 to 323 BC). The technical ability of the Hellenistic sculptors are clearly shown in such major works as the Winged Victory of Samothrace, and the Pergamon Altar.

New centers of Greek culture, particularly in sculpture, developed in Alexandria, Antioch, Pergamum, and other cities. By the 2nd century BC, the rising power of Rome had also taken much of the Greek tradition—and an increasing proportion of its products as well.

During this period, sculpture again experienced a shift towards increasing naturalism. Common people, women, children, animals, and domestic scenes became acceptable subjects for sculpture, which were commissioned by wealthy families for the decoration of their homes and gardens. 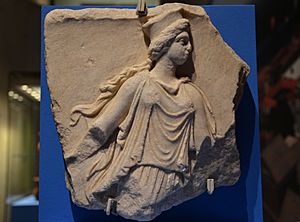 Fragment of a marble relief depicting a Kore 3rd century BC.

Realistic figures of men and women of all ages were produced, and sculptors no longer felt that they had to sculpt people of beauty or physical perfection.

At the same time, new Hellenistic cities springing up in Egypt, Syria, and Anatolia required statues depicting the gods and heroes of Greece for their temples and public places. This made sculpture, like pottery, an industry. 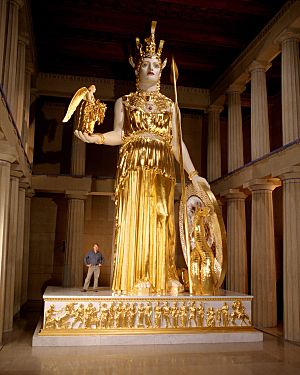 Reproduction of the Athena Parthenos

Alongside the natural shift towards naturalism, there was a shift in expression of the sculptures as well. Sculptures began expressing more power and energy during this time period.

All ancient Greek temples and Roman temples normally contained a cult image in the cella. The most famous Greek cult images of this type were the Statue of Zeus at Olympia, and Phidias's Athena Parthenos in the Parthenon in Athens, both colossal statues now completely lost.

Many of the Greek statues well known from Roman marble copies were originally temple cult images, which in some cases, such as the Apollo Barberini. Very few actual originals survive, though the bronze Piraeus Athena which is 2.35 meters high still does and can be seen in the Archaeological Museum of Piraeus in Athens.

All content from Kiddle encyclopedia articles (including the article images and facts) can be freely used under Attribution-ShareAlike license, unless stated otherwise. Cite this article:
Ancient Greek sculpture Facts for Kids. Kiddle Encyclopedia.