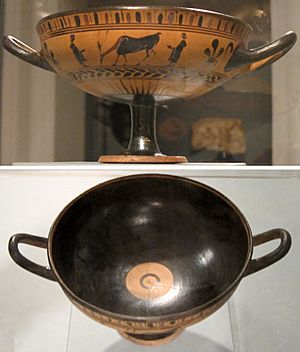 In the pottery of ancient Greece, a kylix is the most common type of wine-drinking cup. It has a broad, relatively shallow, body raised on a stem from a foot and usually two horizontal handles disposed symmetrically. The main alternative wine-cup shape was the kantharos, with a narrower and deeper cup and high vertical handles.

The almost flat interior circle of the base of the cup, called the tondo, was generally the primary surface for painted decoration in the black-figure or red-figure pottery styles of the 6th and 5th century BC, and the outside was also often painted. As the representations would be covered with wine, the scenes would only be revealed in stages as the wine was drained. They were often designed with this in mind, with scenes created so that they would surprise or titillate the drinker as they were revealed.

The word comes from the Greek kylix "cup," which is cognate with Latin calix, the source of the English word "chalice" but not related to the similar Greek word calyx which means "husk" or "pod". The term seems to have been rather more generally used in ancient Greece. Individual examples and the many named sub-varieties of kylix are often called names just using "cup". Like all other types of Greek pottery vessels, they are also covered by the general term of "vase".

Individual kylixes with articles include:

All content from Kiddle encyclopedia articles (including the article images and facts) can be freely used under Attribution-ShareAlike license, unless stated otherwise. Cite this article:
Kylix Facts for Kids. Kiddle Encyclopedia.