Bronze is a metal alloy. Bronze is mostly copper, with some tin added (usually between 5% and 20% tin).

Bronze was the first alloy that was used by humans. The first nation that used Bronze was Egypt about 3500 years B.C. This gave the name for the Bronze Age.

When people learned how to make and work iron, the Bronze Age ended, and the Iron Age started. Iron can be made harder than bronze, but is susceptible to corrosion (see rust). Iron also wears away faster than bronze, when different pieces are moving against each other. Iron is very common, and easy to make. For this reason, iron costs less than bronze. This is the reason why iron is now used where bronze used to be used.

Various kinds of bronze are used in many different industrial applications. 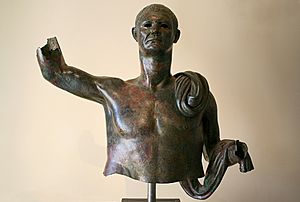 The Assyrian king Sennacherib (704–681 BC) claims to have been the first to cast monumental bronze statues (of up to 30 tonnes) using two-part moulds instead of the lost-wax method.

Bronze statues were regarded as the highest form of sculpture in Ancient Greek art, though survivals are few, as bronze was a valuable material in short supply in the Late Antique and medieval periods. Many of the most famous Greek bronze sculptures are known through Roman copies in marble, which were more likely to survive.

In India, bronze sculptures from the Kushana (Chausa hoard) and Gupta periods (Brahma from Mirpur-Khas, Akota Hoard, Sultanganj Buddha) and later periods (Hansi Hoard) have been found. Indian Hindu artisans from the period of the Chola empire in Tamil Nadu used bronze to create intricate statues via the lost wax casting method with ornate detailing depicting the deities of Hinduism. The art form survives to this day, with many silpis, craftsmen, working in the areas of Swamimalai and Chennai.

In antiquity other cultures also produced works of high art using bronze. For example: in Africa, the bronze heads of the Kingdom of Benin; in Europe, Grecian bronzes typically of figures from Greek mythology; in east Asia, Chinese ritual bronzes of the Shang and Zhou dynasty—more often ceremonial vessels but including some figurine examples. Bronze sculptures, although known for their longevity, still undergo microbial degradation; such as from certain species of yeasts.

Bronze continues into modern times as one of the materials of choice for monumental statuary.

Before it became possible to produce glass with acceptably flat surfaces, bronze was a standard material for mirrors. The reflecting surface was typically made slightly convex so that the whole face could be seen in a small mirror. Bronze was used for this purpose in many parts of the world, probably based on independent discoveries.

Bronze mirrors survive from the Egyptian Middle Kingdom (2040–1750 BCE). In Europe, the Etruscans were making bronze mirrors in the sixth century BCE, and Greek and Roman mirrors followed the same pattern. Although other materials such as speculum metal had come into use, bronze mirrors were still being made in Japan in the eighteenth century AD. 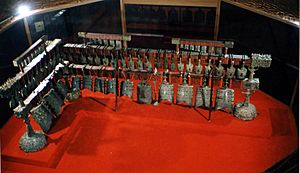 Chinese bells:Bianzhong of Marquis Yi of Zeng, Spring and Autumn period (476–221 BC) 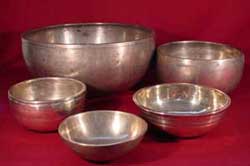 Singing bowls from the 16th to 18th centuries. Annealed bronze continues to be made in the Himalayas

Bronze is the preferred metal for bells in the form of a high tin bronze alloy known colloquially as bell metal, which is about 23% tin.

Nearly all professional cymbals are made from bronze, which gives a desirable balance of durability and timbre. Several types of bronze are used, commonly B20 bronze, which is roughly 20% tin, 80% copper, with traces of silver, or the tougher B8 bronze which is made from 8% tin and 92% copper. As the tin content in a bell or cymbal rises, the timbre drops.

Bronze is also used for the windings of steel and nylon strings of various stringed instruments such as the double bass, piano, harpsichord, and guitar. Bronze strings are commonly reserved on pianoforte for the lower pitch tones, as they possess a superior sustain quality to that of high-tensile steel.

Bronzes of various metallurgical properties are widely used in struck idiophones around the world, notably bells, singing bowls, gongs, cymbals, and other idiophones from Asia. Examples include Tibetan singing bowls, temple bells of many sizes and shapes, gongs, Javanese gamelan, and other bronze musical instruments. The earliest bronze archeological finds in Indonesia date from 1–2 BCE, including flat plates probably suspended and struck by a wooden or bone mallet. Ancient bronze drums from Thailand and Vietnam date back 2,000 years. Bronze bells from Thailand and Cambodia date back to 3,600 BCE.

Some companies are now making saxophones from phosphor bronze (3.5 to 10% tin and up to 1% phosphorus content). Bell bronze is used to make the tone rings of many professional model banjos. The tone ring is a heavy (usually 3 lbs.) folded or arched metal ring attached to a thick wood rim, over which a skin, or most often, a plastic membrane (or head) is stretched – it is the bell bronze that gives the banjo a crisp powerful lower register and clear, bell-like treble register-especially in bluegrass music.

Bronze has also been used in coins; most “copper” coins are actually bronze, with about 4 percent tin and 1 percent zinc.

As with coins, bronze has been used in the manufacture of various types of medals for centuries, and are known in contemporary times for being awarded for third place in sporting competitions and other events. The later usage was in part attributed to the choices of gold, silver and bronze to represent the first three Ages of Man in Greek mythology: the Golden Age, when men lived among the gods; the Silver age, where youth lasted a hundred years; and the Bronze Age, the era of heroes, and was first adopted at the 1904 Summer Olympics. At the 1896 event, silver was awarded to winners and bronze to runners-up, while at 1900 other prizes were given, not medals.

When an alloy is called Bronze, it usually means the alloy of copper and tin. When two words are used to name an alloy, and one of the words is Bronze, this means that the alloy is made mostly from copper. The other word tells us what other metal was combined with copper to make this alloy.

Bronze should not be confused with brass which is a different alloy of copper and zinc.

All content from Kiddle encyclopedia articles (including the article images and facts) can be freely used under Attribution-ShareAlike license, unless stated otherwise. Cite this article:
Bronze Facts for Kids. Kiddle Encyclopedia.