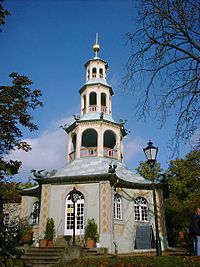 The Dragon House in Potsdam

Chinoiserie refers to elements in European art that are influenced by Chinese arts. Some of the most prominent examples of Chinoiserie can be found in royal palaces in Europe, such as the Drottningholm Palace in Sweden and Tsarskoye Selo in Russia.

All content from Kiddle encyclopedia articles (including the article images and facts) can be freely used under Attribution-ShareAlike license, unless stated otherwise. Cite this article:
Chinoiserie Facts for Kids. Kiddle Encyclopedia.