Palermo is a Italian city. It is the capital and largest city of Sicily. It has 720,000 people, with more than 1,000,000 in the metropolitan area. It has a hot-summer Mediterranean climate. The city started as a colony of Phoenicia. It was later Islamic and Norman and part of the Kingdom of the Two Sicilies.

Palermo lies in a basin, formed by the Papireto, Kemonia and Oreto rivers. The basin was named the Conca d'Oro (the Golden Basin) by the Arabs in the 9th century. The city is surrounded by a mountain range which is named after the city itself. These mountains face the Tyrrhenian Sea. Palermo is home to a natural port and offers excellent views to the sea, especially from Monte Pellegrino. 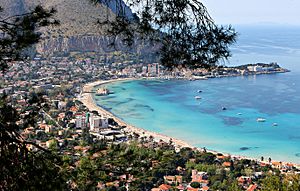 Palermo experiences a hot-summer subtropical Mediterranean climate (Köppen climate classification: Csa) that is mild with moderate seasonality. Summers are very long, hot and dry due to the domination of subtropical high pressure system, while winters experience moderate temperatures and changeable, rainy weather due to the polar front.

Temperatures in autumn and spring are usually mild. Palermo is one of the warmest cities in Europe (mainly due to its warm nights), with an average annual air temperature of 18.3 °C (64.9 °F), it's one of the warmest cities in Italy. It receives approximately 2,530 hours of sunshine per year. Snow is a rare occurrence having snowed about a dozen times since 1945. Since the 1940s to nowadays there have been at least five times when considerable snowfall has occurred.

Palermo has a large architectural heritage and is notable for its many Norman buildings. 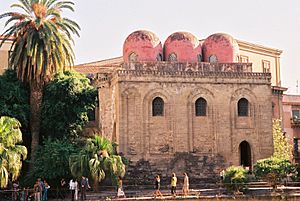 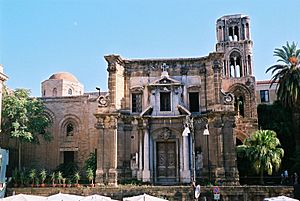 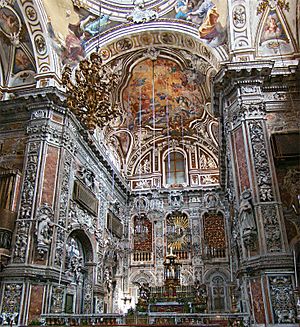 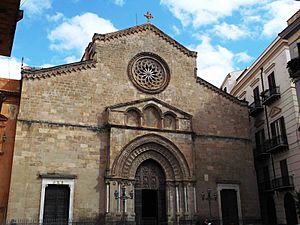 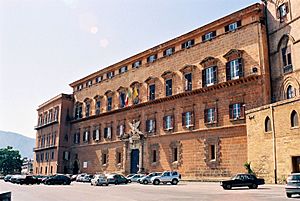 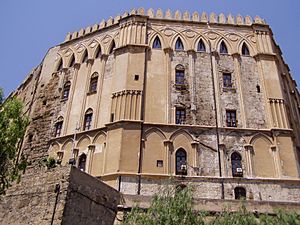 Palermo has at least two rings of city walls, many pieces of which still survive. The first ring surrounded the ancient core of the Phoenician city – the so-called Palaeopolis (in the area east of Porta Nuova) and the Neapolis. Via Vittorio Emanuele was the main road east–west through this early walled city. The eastern edge of the walled city was on Via Roma and the ancient port in the vicinity of Piazza Marina. The wall circuit was approximately Porto Nuovo, Corso Alberti, Piazza Peranni, Via Isodoro, Via Candela, Via Venezia, Via Roma, Piazza Paninni, Via Biscottari, Via Del Bastione, Palazzo dei Normanni and back to Porto Nuovo.

In the medieval period the walled city was expanded. Via Vittorio Emanuele continued to be the main road east–west through the walled city. The west gate was still Porta Nuova, the walls continued to Corso Alberti, to Piazza Vittorio Emanuele Orlando where it turned east along Via Volturno to Piazza Verdi and along the line of Via Cavour. At this northeast corner there was a defence, Castello a Mare, to protect the port at La Cala. A huge chain was used to block La Cala with the other end at Santa Maria della Catena (St Mary of the Chain). The sea-side wall was along the western side of Foro Italico Umberto. The wall turns west along the northern side of Via Abramo Lincoln, continues along Corso Tukory. The wall turns north approximately on Via Benedetto, to Palazzo dei Normanni and back to Porta Nuova.

Several gates in the city wall survive. Images of the wall can be seen here. 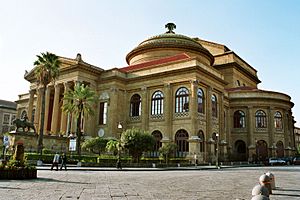 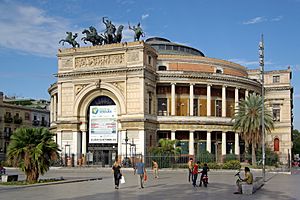 Up until the beginning of 20th century there were hundreds of small opera theatres known as magazzeni in the city of Palermo. 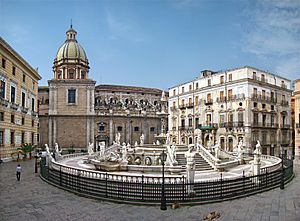 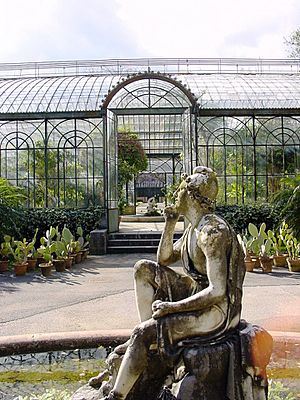 The cathedral has a heliometer (solar observatory) dating to 1690, one of a number built in Italy in the 17th and 18th centuries. The device itself is quite simple: a tiny hole in one of the minor domes acts as pinhole camera, projecting an image of the sun onto the floor at solar noon (12:00 in winter, 13:00 in summer). There is a bronze line, la Meridiana, on the floor, running precisely north–south. The ends of the line mark the positions as at the summer and winter solstices; signs of the zodiac show the various other dates throughout the year.

The purpose of the instrument was to standardise the measurement of time and the calendar. The convention in Sicily had been that the (24‑hour) day was measured from the moment of dawn, which of course meant that no two locations had the same time and, more importantly, did not have the same time as in St. Peter's Basilica in Rome. It was also important to know when the vernal equinox occurred, to provide the correct date for Easter.

The Orto botanico di Palermo (Palermo Botanical Garden), founded in 1785, is the largest in Italy with a surface of 10 hectares (25 acres).

One site of interest is the Capuchin Catacombs, with many mummified corpses in varying degrees of preservation.

Close to the city is the 600-metre-high (2,000 ft) Monte Pellegrino, offering a panorama of the city, its surrounding mountains and the sea.

Another good panoramic viewpoint is the promontory of Monte Gallo (586 m, 1,923 ft), near Mondello Beach.

All content from Kiddle encyclopedia articles (including the article images and facts) can be freely used under Attribution-ShareAlike license, unless stated otherwise. Cite this article:
Palermo Facts for Kids. Kiddle Encyclopedia.