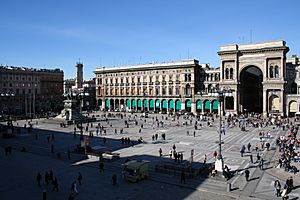 Northern Italy (Italia Settentrionale, Italia del Nord, Padania, Alta Italia, Norditalia or just Nord) is an area that is made up of two areas in Italy:

Northern Italy is more a business area compared to the south and is colder. People from the south sometimes emigrate to the north because of this. This region has 26,835,082 inhabitants and an area of 46,301 mi² (119,921 km²). The largest city is Milan. It is generally seen as having a higher wealth than the southern regions of Italy. This is due to the 'North-South' Divide which is said to split the country in half in terms of means of development.

All content from Kiddle encyclopedia articles (including the article images and facts) can be freely used under Attribution-ShareAlike license, unless stated otherwise. Cite this article:
Northern Italy Facts for Kids. Kiddle Encyclopedia.