King of Italy facts for kids 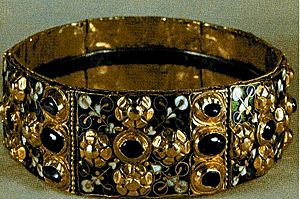 King of Italy (Latin: Rex Italiae; Italian: Re d'Italia) was the title given to the ruler of the Kingdom of Italy after the fall of the Western Roman Empire. The first to take the title was Odoacer, a "barbarian" military leader, in the late 5th century, followed by the Ostrogothic kings up to the mid-6th century. With the Frankish conquest of Italy in the 8th century, the Carolingians assumed the title, which was maintained by subsequent Holy Roman Emperors throughout the Middle Ages. The last Emperor to claim the title was Charles V in the 16th century. During this period, the holders of the title were crowned with the Iron Crown of Lombardy.

Although Napoleon used the title from 1805 to 1814, it was not until the Unification of Italy in the 1860s that a Kingdom of Italy was restored. From 1861 the House of Savoy held the title as monarchs of the entire peninsula until the last King of Italy, Umberto II, exiled in 1946 when Italy became a republic.

After the deposition of the last Western Emperor in 476, Heruli leader Odoacer was appointed Dux Italiae ("Duke of Italy") by the reigning Byzantine Emperor Zeno. Later, the Germanic foederati, the Scirians and the Heruli, as well as a large segment of the Italic Roman army, proclaimed Odoacer Rex Italiae ("King of Italy"). In 493, the Ostrogothic king Theoderic the Great killed Odoacer, and set up a new dynasty of kings of Italy. Ostrogothic rule ended when Italy was reconquered by the Byzantine Empire in 552.

In 568, the Lombards entered the peninsula and ventured to recreate a barbarian kingdom in opposition to the Empire, establishing their authority over much of Italy, except the Exarchate of Ravenna and the duchies of Rome, Venetia, Naples and the southernmost portions. In the 8th century, estrangement between the Italians and the Byzantines allowed the Lombards to capture the remaining Roman enclaves in northern Italy. However, in 774, they were defeated by the Franks under Charlemagne, who deposed their king and took up the title "king of the Lombards". After the death of Charles the Fat in 887, Italy fell into instability and a number of kings attempted to establish themselves as independent Italian monarchs. During this period, known as the Feudal Anarchy (888-962), the title Rex Italicorum ("King of the Italians" or "King of the Italics") was introduced. After the breakup of the Frankish empire, Otto I added Italy to the Holy Roman Empire and continued the use of the title Rex Italicorum. The last to use this title was Henry II (1004-1024). Subsequent emperors used the title "King of Italy" until Charles V. At first they were crowned in Pavia, later Milan, and Charles was crowned in Bologna.

In 1805, Napoleon I was crowned with the Iron Crown of Lombardy at the Milan Cathedral. The next year, Holy Roman Emperor Francis II abdicated his imperial title. From the deposition of Napoleon I (1814) until the Italian Unification (1861), there was no Italian monarch claiming the overarching title. The Risorgimento successfully established a dynasty, the House of Savoy, over the whole peninsula, uniting the kingdoms of Sardinia and the Two Sicilies to form the modern Kingdom of Italy. The monarchy was superseded by the Italian Republic, after a constitutional referendum was held on 2 June 1946 after the World War II. The Italian monarchy formally ended on 12 June of that year, and Umberto II left the country.

After 887, Italy fell into instability, with many rulers claiming the kingship simultaneously:

vassal of the German King Arnulf of Carinthia, reduced to Friuli 889-894, deposed by Arnulf in 896.

opponent of Berengar, ruled most of Italy but was deposed by Arnulf.

In 896, Arnulf and Ratold lost control of Italy, which was divided between Berengar and Lambert:

seized Lambert's portion upon the latter's death in 898.

defeated Berengar but fled Italy in 926.

elected by Berengar's partisans in 925, resigned to Provence after 945.

jointly with his son:

In 951 Otto I of Germany invaded Italy and was crowned with the Iron Crown of Lombardy. In 952, Berengar and Adalbert became his vassals but remained Kings until being deposed by Otto.

Charles V was the last emperor to be crowned king of Italy, or to use the title. The Peace of Westphalia, in 1648, formally ended with the rule of the Holy Roman Emperors in Italy. However, the empire continued to claim territory in northern Italy until its dissolution in 1806.

This title is present on an Italian law by Napoleon I:

[Name], by the Grace of God and the Constitutions, Emperor of the French and King of Italy.

All content from Kiddle encyclopedia articles (including the article images and facts) can be freely used under Attribution-ShareAlike license, unless stated otherwise. Cite this article:
King of Italy Facts for Kids. Kiddle Encyclopedia.