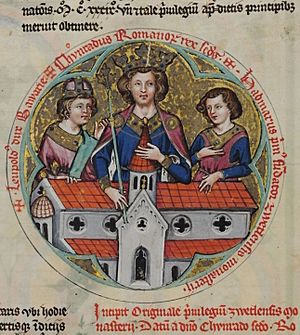 During his reign, he proved that the German monarchy had become strong enough that it no longer depended on contracts between king and dukes alone.

All content from Kiddle encyclopedia articles (including the article images and facts) can be freely used under Attribution-ShareAlike license, unless stated otherwise. Cite this article:
Conrad II, Holy Roman Emperor Facts for Kids. Kiddle Encyclopedia.