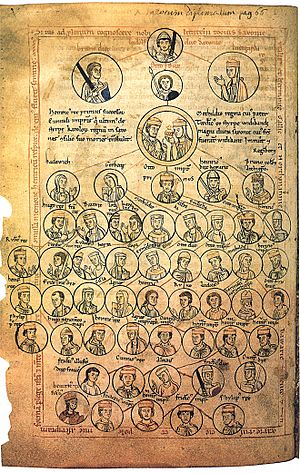 Depiction of the Ottonian family tree in a 13th-century manuscript of the Chronica sancti Pantaleonis. 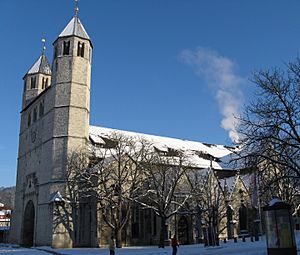 Ottonian dynasty was a dynasty of kings of Germany, named after its first emperor Otto I the Great. But it is also known as the Saxon dynasty after the origin of this family of noblemen. The family itself is also sometimes known as the Liudolfings, after its earliest known member Liudolf and one of its most common names. The Ottonian rulers are also regarded as the first dynasty of the Holy Roman Empire, as successors of the Carolingian dynasty and Charlemagne, who is commonly viewed as the original founder of a new (Frankish) Roman Empire.

Although he was never Emperor, Henry I the Fowler, Duke of Saxony, was the founder of this imperial dynasty, since his election as German king made it possible for his son, Otto the Great to take on the imperium. Since Otto I most of the German kings were also crowned Holy Roman Emperor. Under the reign of the Ottonian rulers, the kingdom of the Eastern Franks finally became Germany as the duchies of Lorraine, Saxony, Franconia, Swabia, Thuringia and Bavaria joined in one empire.

After the end of the Ottonian dynasty (with the death of Henry II in 1024) the crown passed to the Salian dynasty. Luitgard, a daughter of Emperor Otto I had married the Salian Duke Conrad the Red of Lorraine. His great-grandson was Conrad II, Holy Roman Emperor.

Some other famous members of the Liudolfing or Ottonian House:

All content from Kiddle encyclopedia articles (including the article images and facts) can be freely used under Attribution-ShareAlike license, unless stated otherwise. Cite this article:
Ottonian dynasty Facts for Kids. Kiddle Encyclopedia.