Henry I the Fowler facts for kids 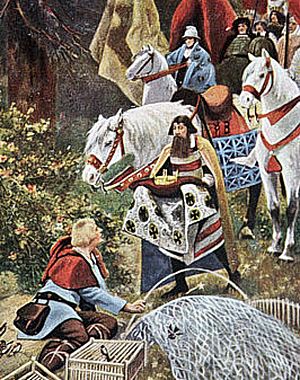 Henry met by a delegation offering the crown while he traps birds. This painting of the legend was done by Hermann Vogel in 1900.

Henry I the Fowler (German: Heinrich der Finkler or Heinrich der Vogler; Latin: Henricius Auceps) (876–2 July 936) was the duke of Saxony from 912 and king of the Germans from 919 until his death. He was the first of the Ottonian Dynasty of German kings and emperors and therefore he is generally considered to be the founder and first king of the medieval German state, that was known until then as East Francia. As he was an eager hunter, he was called "the Fowler" (someone who hunts wildfowl) because it was said he was fixing birding nets when messengers arrived to inform him that he was to be king.

All content from Kiddle encyclopedia articles (including the article images and facts) can be freely used under Attribution-ShareAlike license, unless stated otherwise. Cite this article:
Henry I the Fowler Facts for Kids. Kiddle Encyclopedia.