Kids Encyclopedia Facts
Not to be confused with Roman emperor.

The Holy Roman Emperor (historically Romanorum Imperator "Emperor of the Romans") was the ruler of the Holy Roman Empire. The title was almost without interruption held in conjunction with the rule of the Kingdom of Germany.

After the Reformation, many of the subject states in Germany turned Protestant while the Emperor continued to be a Roman Catholic. Until the Reformation, the Emperor elect (imperator electus) was required to be crowned by the Pope before assuming the imperial title. Various royal houses of Europe, at different times, became hereditary holders of the title. In particular the Habsburgs kept the longest possession of the title. The Holy Roman Empire was dissolved by Francis II, Holy Roman Emperor as a result of the collapse of the polity during the Napoleonic wars. 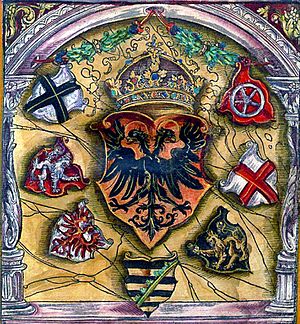 From the time of Constantine I (4th century) the Roman emperors had, with very few exceptions, taken on a role as promoters and defenders of Christianity . The title of Emperor became defunct in Western Europe after the deposition of Romulus Augustulus in AD 476, although the rulers of the "barbarian kingdoms" continued to recognize the Eastern Emperor at least nominally well into the 6th century; both the title and connection between Emperor and Church continued in the Eastern Roman Empire,also known as the Byzantine Empire, until 1453, when it fell to the forces of the Ottoman Empire.

In the west, the title of Emperor (Imperator) was revived in 800, which also renewed ideas of imperial–papal cooperation. As the power of the papacy grew during the Middle Ages, popes and emperors came into conflict over church administration. The best-known and most bitter conflict was that known as the Investiture Controversy, fought during the 11th century between Henry IV and Pope Gregory VII.

After Charlemagne was crowned Emperor of the Romans (Imperator Romanorum) by Pope Leo III, his successors maintained the title until the death of Berengar I of Italy in 924. No pope appointed an emperor again until the coronation of Otto the Great in 962. Under Otto and his successors, much of the former Carolingian kingdom of Eastern Francia fell within the boundaries of the Holy Roman Empire. The various German princes elected one of their peers as King of the Germans, after which he would be crowned as emperor by the Pope. After Charles V's coronation, all succeeding emperors were called elected Emperor due to the lack of papal coronation, but for all practical purposes they were simply called emperors.

The term "sacrum" (i.e. "holy") in connection with the medieval Roman Empire was first used in 1157 under Frederick I Barbarossa. Charles V was the last Holy Roman Emperor to be crowned by the Pope (1530). The final Holy Roman Emperor-elect, Francis II, abdicated in 1806 during the Napoleonic Wars that saw the Empire's final dissolution.

The standard designation of the Holy Roman Emperor was "August Emperor of the Romans" (Romanorum Imperator Augustus). When Charlemagne was crowned in 800, he was styled as "most serene Augustus, crowned by God, great and pacific emperor, governing the Roman Empire," thus constituting the elements of "Holy" and "Roman" in the imperial title.

The word Roman was a reflection of the principle of translatio imperii (or in this case restauratio imperii) that regarded the (Germanic) Holy Roman Emperors as the inheritors of the title of Emperor of the Western Roman Empire, despite the continued existence of the Eastern Roman Empire.

In German-language historiography, the term Römisch-deutscher Kaiser ("Roman-German emperor") is used to distinguish the title from that of Roman Emperor on one hand, and that of German Emperor (Deutscher Kaiser) on the other. The English term "Holy Roman Emperor" is a modern shorthand for "emperor of the Holy Roman Empire" not corresponding to the historical style or title, i.e. the adjective "holy" is not intended as modifying "emperor"; the English term "Holy Roman Emperor" gains currency in the interbellum period (1920s to 1930s); formerly the title had also been rendered "German-Roman emperor" in English.

Succession of the Holy Roman Emperors 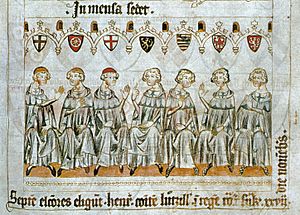 Illustration of the election of Henry VII (27 November 1308) showing (left to right) the Archbishop of Cologne, Archbishop of Mainz, Archbishop of Trier, Count Palatine of the Rhine, Duke of Saxony, Margrave of Brandenburg and King of Bohemia (1341 miniature).

The elective monarchy of the kingdom of Germany goes back to the early 10th century, the election of Conrad I of Germany in 911 following the death without issue of Louis the Child, the last Carolingian ruler of Germany. Elections meant the kingship of Germany was only partially hereditary, unlike the kingship of France, although sovereignty frequently remained in a dynasty until there were no more male successors. The process of election meant that the prime candidate had to make concessions, by which the voters were kept on side, which were known as Wahlkapitulationen (electoral capitulation).

Conrad was elected by the German dukes, and it is not known precisely when the system of seven prince-electors was established. The papal decree Venerabilem by Innocent III (1202), addressed to Berthold V, Duke of Zähringen, establishes the election procedure by (unnamed) princes of the realm, reserving for the pope the right to approve of the candidates. A letter of Pope Urban IV (1263), in the context of the disputed vote of 1256 and the subsequent the interregnum, suggests that by "immemorial custom", seven princes had the right to elect the King and future Emperor. The seven prince-electors are named in the Golden Bull of 1356: The Archbishop of Mainz, the Archbishop of Trier, the Archbishop of Cologne, the King of Bohemia, the Count Palatine of the Rhine, the Duke of Saxony and the Margrave of Brandenburg.

After 1438, the Kings remained in the house of Habsburg and Habsburg-Lorraine, with the brief exception of Charles VII, who was a Wittelsbach. Maximilian I (Emperor 1508–1519) and his successors no longer travelled to Rome to be crowned as Emperor by the Pope. Maximilian therefore named himself Elected Roman Emperor (Erwählter Römischer Kaiser) in 1508 with papal approval. This title was in use by all his uncrowned successors. Of his successors only Charles V, the immediate one, received a papal coronation.

The Elector Palatine's seat was conferred on the Duke of Bavaria in 1621, but in 1648, in the wake of the Thirty Years' War, the Elector Palatine was restored, as eighth elector. Brunswick-Lüneburg was added as ninth elector in 1692. The whole college was reshuffled in the German mediatization of 1803, a mere three years before the dissolution of the Empire.

This list includes all 47 German monarchs crowned as emperors from Charlemagne until the dissolution of the Holy Roman Empire (800–1806).

Several rulers were crowned King of the Romans (King of Germany) but not emperor, such as Conrad I of Germany and Henry the Fowler in the 10th century, and Conrad IV, Rudolf I, Adolf and Albert I during the interregnum of the late 13th century.

Traditional historiography assumes a continuity between the Carolingian Empire and the Holy Roman Empire, while a modern convention takes the coronation of Otto I in 962 as the starting point of the Holy Roman Empire (although the term Sacrum Imperium Romanum was not in use before the 13th century).

The rulers who were crowned as Emperors in the West before 962 were as follows:

While earlier Germanic and Italian monarchs had been crowned as western Roman Emperors, the actual Holy Roman Empire is usually considered to have begun with the crowning of the Saxon king Otto I. It was officially an elective position, though at times it ran in families, notably the four generations of the Salian dynasty in the 11th century. From the end of the Salian dynasty through the middle 15th century, the Emperors drew from many different German dynasties, and it was rare for the throne to pass from father to son. That changed with the ascension of the Austrian House of Habsburg, as an unbroken line of Habsburgs would hold the Imperial throne until the 18th century, later a cadet branch known as the House of Habsburg-Lorraine would likewise pass it from father to son until the abolition of the Empire in 1806. Notably, the Habsburgs also dispensed with the requirement that emperors be crowned by the pope before exercising their office. Starting with Ferdinand I, all successive Emperors forwent the traditional coronation.

The interregnum of the Holy Roman Empire is taken to have lasted from the deposition of Frederick II by Pope Innocent IV (1245, alternatively form the death of Frederick 1250, or the death of Conrad IV 1254) and the election of Rudolf I of Germany (1273). Rudolf was not crowned emperor, nor were his successors Adolf and Albert, The next emperor was Henry VII, crowned on 29 June 1312 by Pope Clement V.

The Emperor was crowned in a special ceremony, traditionally performed by the Pope in Rome. Without that coronation, no king, despite exercising all powers, could call himself Emperor. In 1508, Pope Julius II allowed Maximilian I to use the title of Emperor without coronation in Rome, though the title was qualified as Electus Romanorum Imperator ("elected Emperor of the Romans"). Maximilian's successors adopted the same titulature, usually when they became the sole ruler of the Holy Roman Empire. Maximilian's first successor Charles V was the last to be crowned Emperor.

All content from Kiddle encyclopedia articles (including the article images and facts) can be freely used under Attribution-ShareAlike license, unless stated otherwise. Cite this article:
Holy Roman Emperors Facts for Kids. Kiddle Encyclopedia.