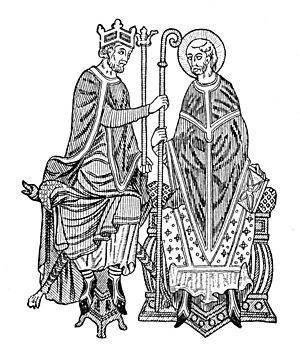 The Investiture controversy or Investiture contest was a conflict between church and state in medieval Europe over the ability to appoint local church officials like through investiture. By undercutting imperial power, the controversy led to nearly 50 years of civil war in Germany. According to Historian Norman Cantor, the investiture controversy was "the turning-point in medieval civilization", marking the end of the Early Middle Ages with the Germanic peoples' "final and decisive" acceptance of Christianity. More importantly, it set the stage for the religious and political system of the High Middle Ages. 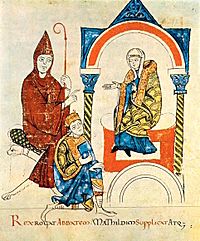 It began as a power struggle between Pope Gregory VII and Emperor Henry IV in 1056. There was also a brief but significant investiture struggle between Pope Paschal II and King Henry I of England from 1103 to 1107. The conflict ended in 1122, when Pope Callixtus II and Emperor Henry V agreed on the Concordat of Worms, which differentiated between the royal and spiritual powers and gave the emperors a limited role in selecting bishops. The outcome was largely a papal victory but the Emperor still retained considerable power.

In the 11th and 12th centuries, a series of popes challenged the authority of European monarchies about who had the authority to appoint ("invest") local church officials such as bishops of cities and abbots of monasteries.

All content from Kiddle encyclopedia articles (including the article images and facts) can be freely used under Attribution-ShareAlike license, unless stated otherwise. Cite this article:
Investiture Controversy Facts for Kids. Kiddle Encyclopedia.