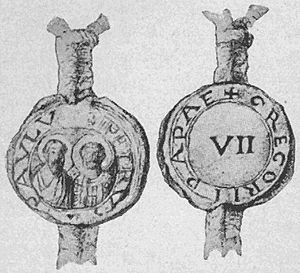 Hildebrand was born in Sovana in Tuscany. As a youth, he became a Benedictine monk.

In Rome, Hildebrand became the chaplain of Pope Gregory VI. When Gregory VI abdicated and went into in exile in Germany, Hildebrand went with him.

Pope Leo IX raised Hildebrand to the rank of Cardinal in 1049.

Cardinal Hildebrand was elected pope on April 22, 1073; and he chose to be called Gregory.

Pope Gregory was involved in Italian and European political disputes.

Pope Gregory died an exile in Salerno. His last words were: "I have loved justice and hated iniquity; therefore, I [now] die in exile." ("Dilexi iustitiam et odivi iniquitatem propterea morior in exilio")..

All content from Kiddle encyclopedia articles (including the article images and facts) can be freely used under Attribution-ShareAlike license, unless stated otherwise. Cite this article:
Pope Gregory VII Facts for Kids. Kiddle Encyclopedia.