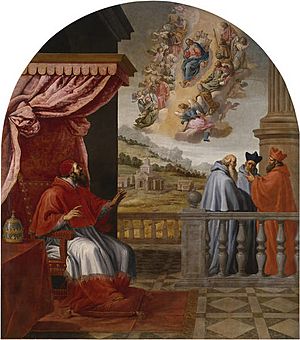 Dauferius was born in the Lombardy region of Italy.

When Dauferius became a Benedictine monk, he took the name Desiderius. He became the abbot of Monte Cassino.

In 1059, Abbot Desiderius was made a cardinal by Pope Stephen IX.

Despite frail health, he was elected pope in 1086.

In 1887, Victor was beatified by Pope Leo XIII.

All content from Kiddle encyclopedia articles (including the article images and facts) can be freely used under Attribution-ShareAlike license, unless stated otherwise. Cite this article:
Pope Victor III Facts for Kids. Kiddle Encyclopedia.