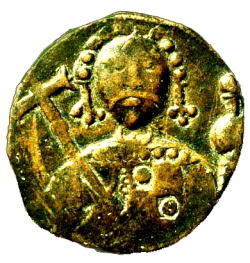 Robert de Hauteville, dubbed "Guiscard", was born at Hauteville, near Coutances (Normandy). He was the sixth son of Tancred of Hauteville and eldest by his second wife Fressenda (or Fredesenda), daughter of Duke Richard I of Normandy.

Like many other impoverished Norman knights (Rainulf Drengot, William Ironarm, and more), Robert de Hauteville went to Italy, arriving there about 1046. After serving in the forces of the prince lombard of Capua, Pandulf, he organized an army to secure possessions for himself in Calabria. In 1053, when the Pope Leo IX attempted to expel the Normans from the South Italy, Robert Guiscard played an important role in defeating the papal forces at Civitate, near the modern city of San Severo (Province of Foggia).

After the death in 1057 of his older brother Humphrey, count of Apulia, Guiscard became leader of the Normans in Italy. The pope, seeking independence from the Holy Roman Empire, decided to enlist the Normans as allies. In 1059 the French Pope Nicholas II created Robert "by the Grace of God and Saint Peter, duke of Apulia and Calabria and, with their help, hereafter of Sicily" (Robertus Guiscardus, Normannus Dux Apuliae, Calabriae et Siciliae). In return, Robert acknowledged the pope as his feudal overlord. Sicily was in Muslim hands at the time and so Robert and his brother Roger Bosso embarked on a series of campaigns, capturing Messina in 1061 and Palermo in 1072. 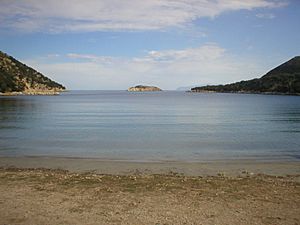 The beach where Guiscard died.

Turning his attention to the Balkans in 1081, Guiscard gained a great victory over the Byzantine emperor Alexius I Comnenus at Durazzo (Albania). In Greece, his campaigns at Macedonia and Thessalia were being carried on, meanwhile, by his son Bohamund. Robert was recalled from his victorious campaigns in 1084 to go to the aid of Pope Gregory VII, who was besieged in the castle of Sant'Angelo by Holy Roman Emperor Henry IV. Robert drove Henry from Rome, and reduced one-third of the city to ashes. Because of the unpopularity of Gregory VII in Rome, he took the pope to Monte Cassino. Robert then went to the support of Bohamund in the Greek campaign but died of fever at Kefalonia a few weeks later (July 1085). He was buried in the Hauteville family mausoleum of the Trinity Abbey (SS. Trinità) at Venosa. The town of Fiscardo on Kefalonia is named after him.

All content from Kiddle encyclopedia articles (including the article images and facts) can be freely used under Attribution-ShareAlike license, unless stated otherwise. Cite this article:
Robert Guiscard Facts for Kids. Kiddle Encyclopedia.