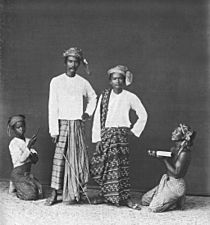 Nobility was the highest social class in pre-modern societies. In the feudal system (in Europe and elsewhere), the nobility were mostly those who got land from the monarch and had to provide services to him, mainly military service. Men of this class were called noblemen. It soon became a hereditary class, sometimes with a right to bear a hereditary title and to have financial and other privileges.

Today, in most countries, "noble status" means no legal privileges; an important exception is the United Kingdom, where certain titles (titles of the peerage, until recently guaranteed a seat in the Upper House of Westminster Parliament, that is why it is called House of Lords), and still means some less important privileges.

All content from Kiddle encyclopedia articles (including the article images and facts) can be freely used under Attribution-ShareAlike license, unless stated otherwise. Cite this article:
Nobility Facts for Kids. Kiddle Encyclopedia.