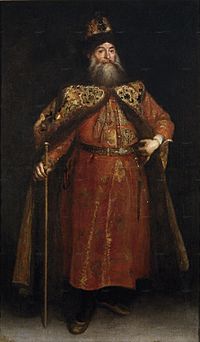 A boyar was a member of the ruling nobility in medieval Russia and some other Slavic countries such as Bulgaria. The boyars held the most important jobs in the army. They met in a group called the duma and gave advice to the ruling prince or, in later times, the tsar. In the 13th and 14th centuries they were rich landowners who could advise the prince, but they were free to go and work for another prince if they wanted to.

In Moscow from the 15th to the 17th centuries they were a closely bonded aristocracy. There were about 200 boyar families. Their ancestors were former princes, or Moscow boyar families or foreign aristocrats. They were not nobility in the European sense. Many of them had bad manners and not many of them could read. They did not travel, and they were suspicious of anything foreign

In the 17th century they started to lose power. In the early 18th century Tsar Peter the Great abolished the title of boyar.

All content from Kiddle encyclopedia articles (including the article images and facts) can be freely used under Attribution-ShareAlike license, unless stated otherwise. Cite this article:
Boyar Facts for Kids. Kiddle Encyclopedia.