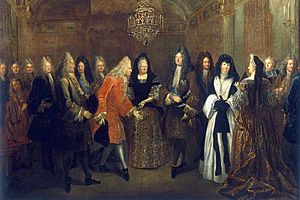 The King of France, Louis XIV receives the future King of Poland, Augustus III in Fontainebleau

Aristocracy is a kind of government that puts power in the hands of a small, privileged ruling class. In Ancient Greek, the word aristocracy means the rule of the best, but it has come to be linked with rule by Nobility.

There are different kinds of aristocracy with different ways the government is set up. In history, most aristocracies are hereditary. Members of the ruling group have passed on power to their eldest surviving son, and sometimes to their eldest daughter. Aristocracy can be combined with other kinds of government. There were small groups of people that run a country. The people were called aristocrats and often had titles such as duke, duchess, baron and baroness.

All content from Kiddle encyclopedia articles (including the article images and facts) can be freely used under Attribution-ShareAlike license, unless stated otherwise. Cite this article:
Aristocracy Facts for Kids. Kiddle Encyclopedia.