Haile Selassie I of Ethiopia facts for kids 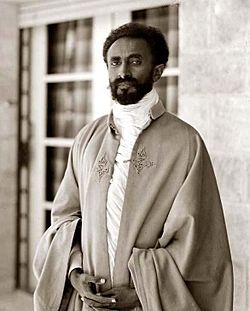 Haile Selassie I of Ethiopia

Haile Selassie I of Ethiopia (July 23, 1892 - August 26, 1975) was the Emperor of Ethiopia. He is also known as the religious symbol for God incarnate (in the flesh) among members of the Rastafari movement, who call themselves by his name before becoming Emperor - Ras Tafari.

Tafari was made into local governor of Sidamo in 1907, and Harar province in 1911. As governor of Harar, he had a huge following, but he agreed not to remove Lij Iyasu from power as regent, in exchange for Lij Iyasu not removing him as governor of Harer. However, Iyasu became a Muslim, and also he did try to remove Tafari as governor, breaking the agreement. Tafari said that now the agreement was broken, he did not have to keep it either, and so he did remove Iyasu as regent.

Because Iyasu had gone over to Islam, the nobles replaced him with Empress Zauditu on September 27, 1916 and made Tafari regent. From this time onward, he controlled Ethiopia. He was made negus (king) in 1928, and was crowned "Haile Selassie I, King of Kings of Ethiopia, Conquering Lion of the Tribe of Judah, Elect of God" on November 2, 1930. His coronation was given widespread publicity throughout the world, especially through two TIME Magazine articles. This publicity created interest on the far-away island of Jamaica, where a belief in his divinity (Godliness) soon arose because of his titles, and because they saw him as a symbol of black liberation.

In 1936 he left Ethiopia after the invasion by Mussolini's Italy. He gave a speech at the League of Nations, asking the world to stop the Italians, but they failed to act. With the help of the British in World War Two, he was able to return to Ethiopia in 1941. In 1963, the Emperor did everything he could to help start the Organisation of African Unity (OAU) with its headquarters in Addis Ababa. In 1966, he visited Jamaica, where he met the Rastafarian community of Jamaica.

On September 12, 1974, he was overthrown by a Marxist coup. They said he died of natural causes the following August, but evidence later showed that they had murdered them. However, many Rastafarians claim he is still alive.

All content from Kiddle encyclopedia articles (including the article images and facts) can be freely used under Attribution-ShareAlike license, unless stated otherwise. Cite this article:
Haile Selassie I of Ethiopia Facts for Kids. Kiddle Encyclopedia.