Benito Amilcare Andrea Mussolini KSMOM GCTE (29 July 1883 – 28 April 1945) was an Italian politician and journalist. He was also the Prime Minister of Italy from 1922 until 1943. He was the leader of the National Fascist Party.

Benito Mussolini was named after Benito Juarez, a Mexican opponent of the political power of the Roman Catholic Church, by his anticlerical (a person who opposes the political interference of the Roman Catholic Church in secular affairs) father. Mussolini's father was a blacksmith. Before being involved in politics, Mussolini was a newspaper editor (where he learned all his propaganda skills) and an elementary school teacher.

At first Mussolini was a socialist, but when he wanted Italy to join the First World War he was thrown out of the socialist party. He 'invented' a new ideology, Fascism, much out of Nationalist and Socialist views.

Rise to power and becoming dictator

In 1922, he took power by having a large group of men, "Black Shirts," march on Rome and threaten to take over the government. King Vittorio Emanuele III gave in, allowed him to form a government, and made him prime minister. In the following five years, he gained power, and in 1927 created the OVRA, his personal secret police force. Using the agency to arrest, scare, or murder people against his regime, Mussolini was dictator of Italy by the end of 1927. Only the King and his own Fascist party could challenge his power.

Fascism as practiced by Mussolini

Mussolini's form of Fascism, "Italian Fascism"- unlike Nazism, the racist ideology that Adolf Hitler followed- was different and less destructive than Hitler's. Although a believer in the superiority of the Italian nation and national unity, Mussolini, unlike Hitler, is quoted "Race? It is a feeling, not a reality. Nothing will ever make me believe that biologically pure races can be shown to exist today".

Mussolini wanted Italy to become a new Roman Empire. In 1923, he attacked the island of Corfu, and in 1924, he occupied the city state of Fiume. In 1935, he attacked the African country Abyssinia (now called Ethiopia). His forces occupied it in 1936. Italy was thrown out of the League of Nations because of this aggression. In 1939, he occupied the country Albania. In 1936, Mussolini signed an alliance with Adolf Hitler, the dictator of Germany.

Fall from power and death

In 1940, he sent Italy into the Second World War on the side of the Axis countries. Mussolini attacked Greece, but he failed to conquer it. In 1943, the Allies landed in Southern Italy. The Fascist party and King Vittorio Emanuel III deposed Mussolini and put him in jail, but he was set free by the Germans, who made him ruler of the Italian Social Republic puppet state which was in a small part of Central Italy. When the war was almost over, Mussolini tried to escape to Switzerland with his mistress, Clara Petacci, but they were both captured and shot by partisans. Mussolini and Clara's dead bodies was hung upside-down on a pole at a gas station in the village of Mezzegra, dispalyed so everyone could see them.

After the war, several Neo-Fascist movements have had success in Italy, the most important being the Movimento Sociale Italiano. His granddaughter Alessandra Mussolini has outspoken views similar to Fascism. 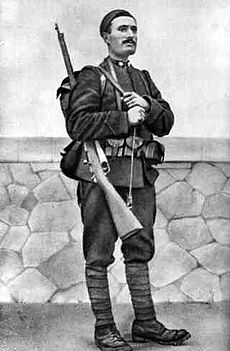 Mussolini as an Italian soldier, 1917

All content from Kiddle encyclopedia articles (including the article images and facts) can be freely used under Attribution-ShareAlike license, unless stated otherwise. Cite this article:
Benito Mussolini Facts for Kids. Kiddle Encyclopedia.