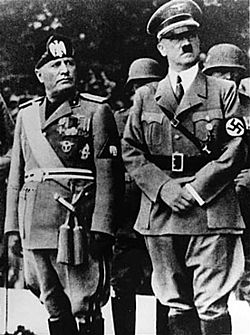 Benito Mussolini (on the left) and Adolf Hitler (on the right) were two dictators that most people consider very bad.

The word dictator or despot in modern times is used to describe the absolute ruler (other than a king) of a country, who uses force and fear to keep himself and his friends in authority, and can effectively make laws all by himself. Dictatorship is a type of government, used in some countries. A country that is ruled by a dictator is called a dictatorship. Dictatorship is often called a cruel government, because it is considered most violent.

The word "dictator" is from the Roman Republic where a man would be given absolute power for half a year or one year to handle an emergency. Julius Caesar was the last Roman Dictator.

Some dictators gained political power in a revolution. Some won an election and cancelled new elections once they took power.

It is not always clear whether a leader is a dictator or not. Some leaders got into power by elections, but sometimes they gave false election results.

Kings and emperors often use force and fear too, but usually they are not called dictators. This is because those monarchs have some reason for being in power (usually their father was king or emperor), but a dictator gained power himself. Also, when someone is king or emperor of a country, usually there were several kings or emperors before them. A dictator often creates the job of dictator by gaining power.

Some people call leaders dictators because they simply do not like them and they seem powerful.

All content from Kiddle encyclopedia articles (including the article images and facts) can be freely used under Attribution-ShareAlike license, unless stated otherwise. Cite this article:
Dictator Facts for Kids. Kiddle Encyclopedia.