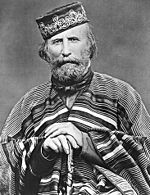 Giuseppe Garibaldi was an Italian soldier. He led the navy of the Riograndense Republic in southern Brazil until it was defeated in 1839. He led the navy of Uruguay to victory. Later he fought for Italian unification. He led a group called the Red Shirts through the Kingdom of Two Sicilies to bring together the kingdoms of Italy in 1860.

All content from Kiddle encyclopedia articles (including the article images and facts) can be freely used under Attribution-ShareAlike license, unless stated otherwise. Cite this article:
Giuseppe Garibaldi Facts for Kids. Kiddle Encyclopedia.