Nice is a city in southern France on the Mediterranean coast. It is a commune in the French department of Alpes-Maritimes. It has over 345,000 people living in the city as of 2012 (1,000,000 in its metropolitan area). It has many beaches. It has a hot-summer Mediterranean climate (Csa in the Koeppen climate classification). Summers are hot, dry, and sunny; winters are mild with moderate rainfall.

From the late 18th century, wealthy British visitors came to Nice, with its beauty and its warm climate. Queen Victoria was amongst them: she made several visits. The city's main seaside promenade, the Promenade des Anglais owes its name to these visitors. The clear air and soft light appeals to painters. Marc Chagall and Henri Matisse spent years here and are well represented in the city's museums, the Musée Marc Chagall, Musée Matisse and Musée des Beaux-Arts.

Nice has the second largest hotel capacity in the country and is one of its most visited cities. It gets 5 million tourists every year. It also has the third busiest airport in France after the two main Parisian ones..

The cuisine is excellent. It benefits from the Mediterranean in the form of bouillabaisse (a shellfish dish). From the end of empire, immigration from Algeria has led to excellent North African dishes such as cous-cous. Ratatouille and (obviously) salade niçoise are more local dishes.

There is a local dialect, le nissard, nissart, or niçard. It is a variety of the regional language, Occitan. It is Italian in style, reminding that the area has been under different sovereignty in the past.

Nice consists of two large bays. Villefranche-sur-Mer sits on an enclosed bay, while the main expanse of the city lies between the old port city and the Aeroport de Côte d'Azur, across a gently curving bay. The city rises from the flat beach into gentle rising hills, then is bounded by surrounding mountains that represent the Southern and nearly the Western extent of the Ligurian Alps range.

The natural vegetation of Nice is typical for a Mediterranean landscape, with a heavy representation of broadleaf evergreen shrubs. Trees tend to be scattered but form dense forests in some areas. Large native tree species include evergreens such as holm oak, stone pine and arbutus. Many introduced species grow in parks and gardens. Palms, eucalyptus and citrus fruits are among the trees which give Nice a subtropical appearance. But there are also species familiar to temperate areas around the world; examples include horse chestnut, linden and even Norway spruce.

Panorama of the town (including many main sights, like Hotel Negresco) and the beach 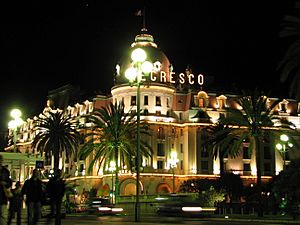 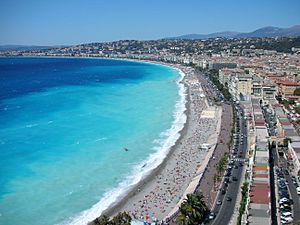 Seafront of the city

The Promenade des Anglais ("Promenade of the English") is a promenade along the Baie des Anges ("Bay of the Angels"), which is a bay of the Mediterranean, in Nice. Before Nice was urbanised, the coastline at Nice was just bordered by a deserted stretch of shingle beach (covered with large pebbles). The first houses were located on higher ground well away from the sea, as wealthy tourists visiting Nice in the 18th century did not come for the beach, but for the gentle winter weather. The areas close to the water were home to Nice's dockworkers and fishermen.

In the second half of the 18th century, many wealthy English people took to spending the winter in Nice, enjoying the panorama along the coast. When a particularly harsh winter up north brought an influx of beggars to Nice, some of the rich Englishmen proposed a useful project for them: the construction of a walkway (chemin de promenade) along the sea.

The city of Nice, intrigued by the prospect of a pleasant promenade, greatly increased the scope of the work. The Promenade was first called the Camin dei Anglès (the English Way) by the Niçois in their native dialect, Nissart. After the annexation of Nice by France in 1860 it was rechristened La Promenade des Anglais, replacing the former Nissart name with its French translation.

The Hotel Negresco on the Promenade des Anglais was named after Henri Negresco (1868–1920) who had the palatial hotel constructed in 1912. In keeping with the conventions of the time, when the Negresco first opened in 1913 its front opened on the side opposite the Mediterranean.

Another place worth mentioning is the small street parallel to the Promenade des Anglais, leading from Nice's downtown, beginning at Place Masséna and running parallel to the promenade in the direction of the airport for a short distance of about 4 blocks. This section of the city is referred to as the "Zone Pietonne", or "Pedestrian Zone". Cars are not allowed (with exception to delivery trucks), making this avenue a popular walkway.

Old Nice is also home to the Opéra de Nice. It was constructed at the end of the 19th century under the design of François Aune, to replace King Charles Félix's Maccarani Theater. Today, it is open to the public and provides a regular program of performances. 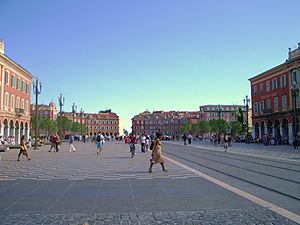 View of the Place Masséna 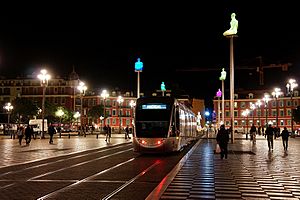 The Place Masséna is the main square of the city. Before the Paillon River was covered over, the Pont-Neuf was the only practicable way between the old town and the modern one. The square was thus divided into two parts (North and South) in 1824. With the demolition of the Masséna Casino in 1979, the Place Masséna became more spacious and less dense and is now bordered by red ochre buildings of Italian architecture.

The recent rebuilding of the tramline gave the square back to the pedestrians, restoring its status as a real Mediterranean square. It is lined with palm trees and stone pines, instead of being the rectangular roundabout of sorts it had become over the years. Since its construction, the Place Masséna has always been the spot for great public events. It is used for concerts, and particularly during the summer festivals, the Corso carnavalesque (carnival parade) in February, the military procession of 14 July (Bastille Day) or other traditional celebrations and banquets.

The Place Masséna is a two-minute walk from the Promenade des Anglais, old town, town centre, and Albert I Garden (Jardin Albert Ier). It is also a large crossroads between several of the main streets of the city: avenue Jean Médecin, avenue Félix Faure, boulevard Jean Jaurès, avenue de Verdun and rue Gioffredo. 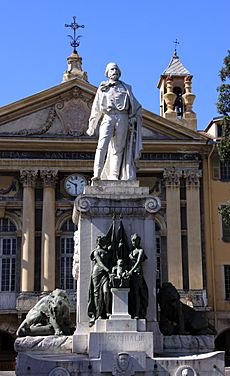 The Place Garibaldi also stands out for its architecture and history. It is named after Giuseppe Garibaldi, hero of the Italian unification (born in Nice in 1807 when Nice was part of the Napoleonic Empire, before reverting to the Kingdom of Piedmont-Sardinia). The square was built at the end of the 18th century and served as the entry gate to the city and end of the road to Turin. It took several names between 1780 and 1870 (Plaça Pairoulièra, Place de la République, Place Napoléon, Place d'Armes, Place Saint-Augustin, Piazza Vittorio) and finally Place Garibaldi in September 1870.

A statue of Garibaldi, who was fiercely in favour of the union of Nice with Italy, stands in the centre of the square. The recent rebuilding of the area to accommodate the new tramway line gave mostly the entire square to pedestrians. The architecture is in line with the Turin model, which was the norm of urban renewal throughout the entire realm of the House of Savoy. 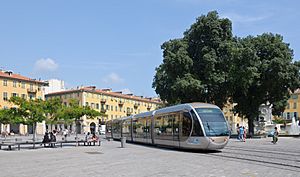 Place Garibaldi, pedestrian since the introduction of the Nice tramway.

It is a crossroads between the Vieux Nice (old town) and the town centre. Place Garibaldi is close to the eastern districts of Nice, Port Lympia (Lympia Harbour), and the TNL commercial centre. This square is also a junction of several important streets: the boulevard Jean-Jaurès, the avenue de la République, the rue Cassini and the rue Catherine-Ségurane. 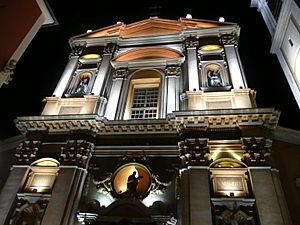 Entirely enclosed and pedestrianised, this square is located in the heart of the old town. With typical buildings in red and yellow ochres surrounding the square, the cathédrale Sainte-Réparate and the fountain in the centre, place Rossetti is a must-see spot in the old town. By day, the place is invaded by the terraces of traditional restaurants and the finest ice-cream makers. By night, the environment changes radically, with tourists and youths flocking to the square, where music reverberates on the walls of the small square. The square's lighting at night gives it a magical aspect.

Place Rossetti is in the centre of the old town, streets Jesus, Rossetti, Mascoïnat and the Pont-vieux (old bridge) 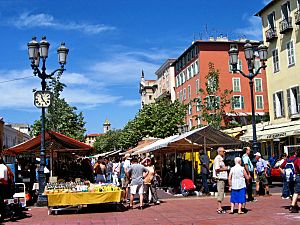 The Cours Saleya is situated parallel to the Quai des États-Unis. In the past, it belonged to the upper classes. It is probably the most traditional square of the town, with its daily flower market. The Cours Saleya also opens on the Palais des Rois Sardes (Palace of the Kings of Sardinia). In the present, the court is mostly a place of entertainment. 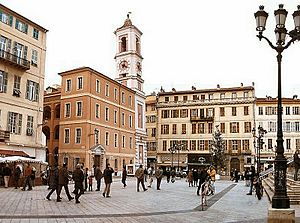 As its name indicates, the Place du Palais is where the Palais de la Justice (Law courts) of Nice is located. On this square, there also is the Palais Rusca, which also belongs to the justice department (home of the tribunal de grande instance).

The square is also notable due to the presence of the city clock. Today, the Place du Palais is alive day and night. Often, groups of youths will hangout on the steps leading to the Palais de la Justice. Concerts, films, and other major public events frequently occur in this space.

It is situated halfway between the Cours Saleya and Place Masséna.

Nice is twinned with:

All content from Kiddle encyclopedia articles (including the article images and facts) can be freely used under Attribution-ShareAlike license, unless stated otherwise. Cite this article:
Nice Facts for Kids. Kiddle Encyclopedia.