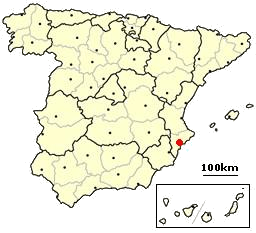 Alicante (red dot) on a map of Spain

Alacant or Alicante (Spanish: Alicante, Valencian: Alacant) is a city in Spain. It is the capital of the province of Alicante. It is in the southern part of the Valencian Community. It is also a historic Mediterranean port. The population of the city of Alicante proper is about 332,067, as of 2014, ranking as the second-largest Valencian city. Including nearby municipalities, Alicante was populated by 458,843 residents. Population of the metropolitan area (including Elche and satellite towns) was 795,034 as of 2009. Based on population it is the eighth-largest metropolitan area of Spain.

The city is a sea port and a tourist centre. It has a hot semi-arid climate (BSh in the Koeppen climate classification).

The avenue Maisonnave is the principal commercial street in the city of Alicante. In fact, Maisonnave is the sixth most expensive avenue in the whole of Spain, which gives an idea of the importance that this street has. The Corte inglés has in this central street both branches that it possesses in Alicant, one at each end of the avenue.

All content from Kiddle encyclopedia articles (including the article images and facts) can be freely used under Attribution-ShareAlike license, unless stated otherwise. Cite this article:
Alicante Facts for Kids. Kiddle Encyclopedia.