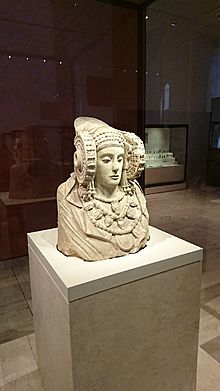 The famous bust of the "Lady of Elche", probably a priestess. 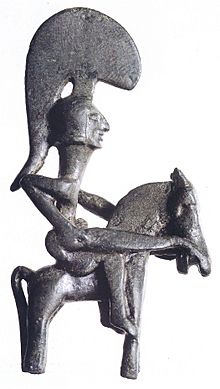 The Iberians were a set of people that Greek and Roman sources (among others, Hecataeus of Miletus, Avienus, Herodotus and Strabo) identified with that name in the eastern and southern coasts of the Iberian peninsula, at least from the 6th century BC. The Roman sources also use the term Hispani to refer to the Iberians.

This pre-Indo-European cultural group spoke the Iberian language from the 7th to the 1st century BC. Other peoples possibly related to the Iberians are the Vascones and the Aquitani. The rest of the peninsula, in the northern, central, and northwestern areas, was inhabited by Celts or Celtiberians groups and the possibly Pre-Celtic or Proto-Celtic Indo-European Lusitanians, Vettones, and the Turdetani.

Due to their military qualities, as of the 5th century BC Iberian soldiers were frequently deployed in battles in Italy, Greece and especially on Sicily.

All content from Kiddle encyclopedia articles (including the article images and facts) can be freely used under Attribution-ShareAlike license, unless stated otherwise. Cite this article:
Iberians Facts for Kids. Kiddle Encyclopedia.