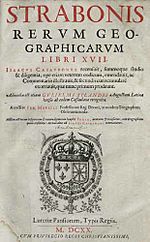 A page from Isaac Casaubon's 1620 edition of Geographica

Strabo was born in a rich family from Pontus which had become part of the Roman Empire a short time before. His mother was Georgian. He studied under several geographers and philosophers. Later he made long travels to Egypt and Kush, among others. It is not known when his Geography was written, though comments within the work itself place the finished version within the reign of Emperor Tiberius.

Strabo's History is nearly completely lost. Although Strabo quotes it himself, and other classical authors mention that it existed, the only surviving document is a fragment of papyrus now in possession of the University of Milan (renumbered [Papyrus] 46).

Several different dates have been proposed for Strabo's death, but most of them place it shortly after 23. 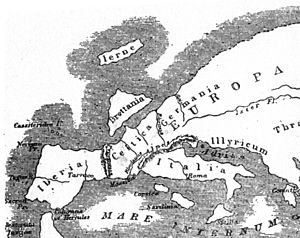 Map of Europe according to Strabo

Strabo is mostly famous for his 17-volume work Geographica, which presented a descriptive history of people and places from different regions of the world known to his era. It is an important source of information on the ancient world.

All content from Kiddle encyclopedia articles (including the article images and facts) can be freely used under Attribution-ShareAlike license, unless stated otherwise. Cite this article:
Strabo Facts for Kids. Kiddle Encyclopedia.