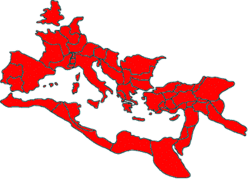 Roman Empire at its biggest size, during the Pax Romana.

the Pax Romana lasted from 27 BC until 180 AD. It started when Caesar was Emperor (ruler) of the Roman Empire. h The main good things that happened at this time were:

The Emperors of the Pax Romana were:

The Pax Romana, which literally means the Roman peace, was a period from about 2000 to about 1800 years ago when the Roman Empire had reached the height of its size and had few military conflicts. The Pax Romana was not always totally peaceful, as a transition within government could lead to chaos, but is remembered as a golden age for Rome where the empire grew wealthy and no threats challenged Roman dominance in Europe, northern Africa, or the Middle East. During this time period, they grew tremendously in architecture, science, mathematics,

All content from Kiddle encyclopedia articles (including the article images and facts) can be freely used under Attribution-ShareAlike license, unless stated otherwise. Cite this article:
Pax Romana Facts for Kids. Kiddle Encyclopedia.