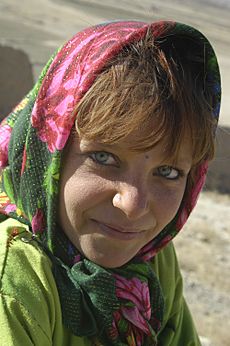 A young Afghan girl at a Kabul, Afghanistan orphanage in January 2002.

An orphan is a child that has no parents . Their parents are either dead or didn't want them . Orphans end up in a house called and orphanage, this is where children with no parents live . Many children that live in an orphanage get fostered or adopted by a person or a couple.

Sometimes parents get sick and die while their child or children are still young, and if no close relatives take care of them, if they cannot or will not do so, they are normally raised in an orphanage. When several children, brothers or sisters are left orphaned they are normally split up; one child going to one family or one child going to a foster family while another may stay in the orphanage.

Sometimes parents may not have jobs or money and abandon their children because they cannot afford to bring them up. The parents may feel that if someone else brings them up they may have a better future in the long run.

In many poor countries orphans are often seen wondering about begging for money and food; many may not be going to school. Not much organised help exists for them in poor countries.

But in richer countries many organisations and institutions help the orphans and work to help parents when they are sick or very poor so they do not abandon their children. Organisations such as churches and community services assist them.

Many characters of books and movies have been orphans, such as Oliver Twist, David Copperfield, Annie, Batman, and Harry Potter.

All content from Kiddle encyclopedia articles (including the article images and facts) can be freely used under Attribution-ShareAlike license, unless stated otherwise. Cite this article:
Orphan Facts for Kids. Kiddle Encyclopedia.