Library of Congress celebration of Action Comics and Superman

Superman is a famous comic book character. He is possibly the first modern superhero character. He was created by Jerry Siegel and Joe Shuster in 1932, while they were still in high school. He first appeared in Action Comics issue #1 in 1938. Later, he appeared in movies, television series, cartoons, commercials, and radio shows. Superman is one of the most popular superheroes and is in the DC Comics. 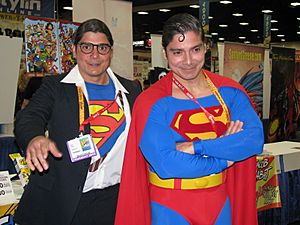 Superman is from a planet called Krypton. His name was Kal-El. His father, Jor-El, found out that their planet was going to explode. Jor-El sent his baby son to Earth in a spacecraft to save him. Kal-El was found and adopted by Jonathan and Martha Kent. They named him Clark Kent. The Kents raised him as their own son in a town called Smallville, Kansas in the United States. There is a television series called Smallville about his time growing up there.

As he grows up, Clark finds out that he has special powers. He is invulnerable (he cannot be hurt). He is strong enough to lift almost anything and he can fly. Superman can run and move faster than a bullet. He has X-ray vision (he can see through walls), and heat vision (he can shoot heat from his eyes). He can freeze things with his frost breath and his super-breath (which allows him to blow super hard). He decides to use his special powers to fight crime and save people in danger. He wears a blue and red costume and cape to keep his alter ego (his real name) a secret. He saves the entire world many times.

Superman moves to a city called Metropolis, and becomes a reporter for the Daily Planet, a newspaper. He falls in love with another reporter, Lois Lane.

His weaknesses are radioactive rocks from his home planet that are called "kryptonite"; and magic. Kryptonite weakens him so he can not use his powers for a long time nor can he move. Sometimes his enemies use it to hurt him. Blue Kryptonite makes people able to control him using hypnosis, green slowly kills him, black makes him evil, and red has many different effects on him (each piece of red kyrptonite affects him differently). There is also gold, white, and jewel kryptonite. Some of Superman's enemies use magic to hurt him.

His arch enemy is a bald (hairless), evil genius named Lex Luthor. He has other deadly enemies too. Bizarro is another version of Superman. He comes from another dimension. Darkseid is a very powerful enemy. He is the ruler of the planet Apokolips. Another enemy includes General Zod who comes from the same planet as Superman.

All content from Kiddle encyclopedia articles (including the article images and facts) can be freely used under Attribution-ShareAlike license, unless stated otherwise. Cite this article:
Superman Facts for Kids. Kiddle Encyclopedia.