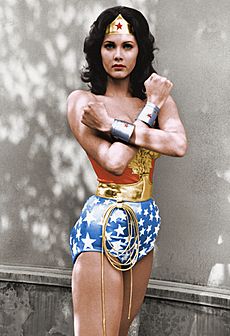 Lynda Carter as Wonder Woman in the 1975-1979 television series

Wonder Woman is a superhero, who appears in DC Comics. She is the first and most famous female superheroes. William Moulton Marston created her and her first publication was in 1941. He was a psychologist who believed that women could be as strong and powerful as men. His wife, Elizabeth helped to create Wonder Woman.

In the comic book, Wonder Woman's real name is Diana Prince and is the daughter of Queen Hippolyta, ruler of the Amazons (a race of Amazonian female immortals from Greek mythology). She is founded by Steve Trevor, a US Air Force pilot, and taken to the United States, where she becomes the superhero Wonder Woman. She has a magic lasso and unbreakable gauntlets which deflect penetrable weapons, both of which help in fighting villains. She has the power of super speed, strength, and she can fly.

Wonder Woman had also appeared in animated cartoons and in a live-action television program in the 1970s with actress Lynda Carter. The series made the character very famous.

In January 2001, producer Joel Silver asked Todd Alcott to write a Wonder Woman screenplay. Early rumours listed actresses such as Mariah Carey, Sandra Bullock, and Catherine Zeta-Jones to play the role of Wonder Woman. Leonard Goldberg, speaking in a May 2001 interview, named Sandra Bullock as a strong candidate for the project. Bullock said that she was asked to play the role. Lucy Lawless and Chyna both were interested in it. The screenplay then went through many versions written by many different writers. By August 2003, Levens was replaced by screenwriter Laeta Kalogridis.

In March 2005, Warner Bros. said that Joss Whedon would write and direct the movie version of Wonder Woman. Because Whedon was directing Serenity at the time and needed time to learn Wonder Woman's background, he did not start writing until late 2005. Silver wanted to movie Wonder Woman in Australia once the script was finished. In May 2005, Whedon said that he would not cast Wonder Woman until he finished the script. Charisma Carpenter and Morena Baccarin said they were interested in the role.

In February 2007, Whedon left the project. He said there were problems with differences about the script between the studio and himself. Whedon said that since he was not doing the Wonder Woman project, he would focus on making his movie Goners.

All content from Kiddle encyclopedia articles (including the article images and facts) can be freely used under Attribution-ShareAlike license, unless stated otherwise. Cite this article:
Wonder Woman Facts for Kids. Kiddle Encyclopedia.